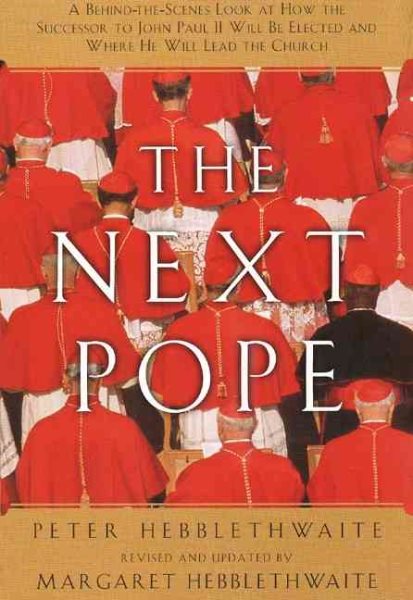 An examination of the papal election process reviews the trends that have shaped previous elections and profiles the most likely candidates for succession to Pope John Paul II. Reprint. Read More
Who will be the next pope? With the waning health of John Paul II, that question is being hotly debated around the world. The answer has profound implications not only for the future direction of Catholicism, but also for the course of world politics and culture. This timely guide, completely revised and updated, offers an inside look at the top contenders, whose remarkable diversity--with several African, Asian, European, and North American cardinals, two Jesuits, a Jewish convert, and several Italians leading the list--reflects how dramatically the Church has changed in the past forty years.The authors, who have closely observed some of the Church's key leaders, provide a compelling, behind-the-scenes look at the dramatic process of electing a pope. They evaluate the political maneuvering, examine the issues sure to influence the next conclave's decision (including the need for a skilled diplomat and a return to choosing an Italian, the ordination of women, and the question of married priests), and project the most likely successors to John Paul II. After demystifying this fascinating yet notoriously secretive process, the Hebblethwaites use their expertise to identify the basic options--to pursue a moderate or a conservative course--that will face the conclave. Read Less

Goodreads reviews for Next Pope, The - Revised & Updated: A Behind-the-Scenes Look at How the Successor to John Paul II Will be Elected and Where He Will Lead The Church

The Next Pope: Issues and Questions