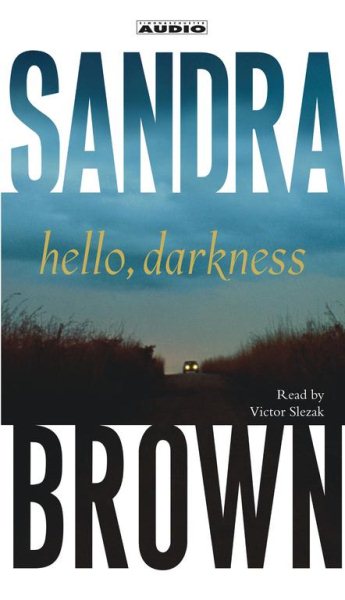 The host of a late night, call-in radio show, Paris Gibson joins with police psychologist Dean Malloy to identify a mysterious caller known only as "Valentino" before he kills a woman whom he feels has wronged him. Read More
Bestselling author Sandra Brown is the master of the knife-edge thriller. Her most powerful novel to date, Hello, Darkness, is the gripping story of a woman haunted by her past and caught in a nightmare that threatens to destroy her future. For Paris Gibson, her popular late night radio show is both an escape and her one real contact with the outside world. Her world of isolation is brutally threatened when one listener -- a man who identifies himself only as "Valentino" -- tells her that her on-air advice to the girl he loves has caused her to jilt him, and that he intends to exact his revenge. First he plans to kill the girl, then he will come after Paris. Joined by the Austin police department, Paris plunges into a race against time in an effort to find Valentino before he can carry out his threat to kill. To her dismay, she finds that one of the people she must work with is crime psychologist Dean Malloy, a man with whom she shares a history that had a catastrophic effect on both their lives. As the clock ticks down, and Valentino's threats come closer to becoming a reality, Paris suddenly finds herself forced to deal with a killer who may not be a stranger at all. Tense and compelling, Hello, Darkness is suspense at its very best, by the author USA Today has called, "A masterful storyteller, carefully crafting tales that keep readers on the edge of their seats." Read Less

A Whole New Light: A Novel