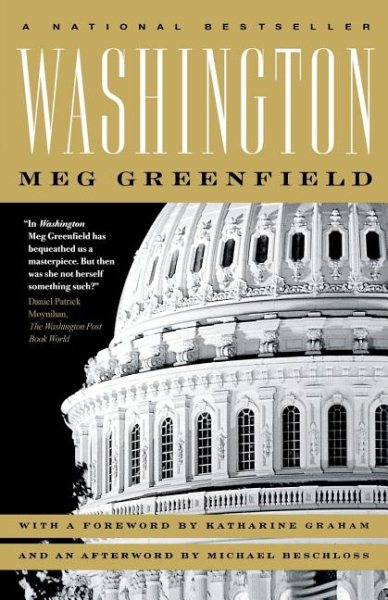 A national bestseller and a timeless classic on the ways and mores of our nation's capitol Read More
With Washington, the illustrious longtime editorial page editor of The Washington Post wrote an instant classic, a sociology of Washington, D.C., that is as wise as it is wry. Greenfield, a recipient of the Pulitzer Prize for commentary, wrote the book secretly in the final two years of her life. She told her literary executor, presidential historian Michael Beschloss, of her work and he has written an afterword telling the story of how the book came into being. Greenfield's close friend and employer, the late Katharine Graham, contributed a moving and personal foreword. Greenfield came to Washington in 1961, at the beginning of the Kennedy administration and joined The Washington Post in 1968. Her editorials at the Post and her columns in Newsweek, were universally admired in Washington for their insight and style. In this, her first book, Greenfield provides a portrait of the U.S. capital at the end of the American century. It is an eccentric, tribal, provincial place where the primary currency is power. For all the scandal and politics of Washington, its real culture is surprisingly little known. Meg Greenfield explains the place with an insider's knowledge and an observer's cool perspective. Read Less

Mutiny on the Amistad: The Saga of a Slave Revolt and its Im...

The Back Rub Book