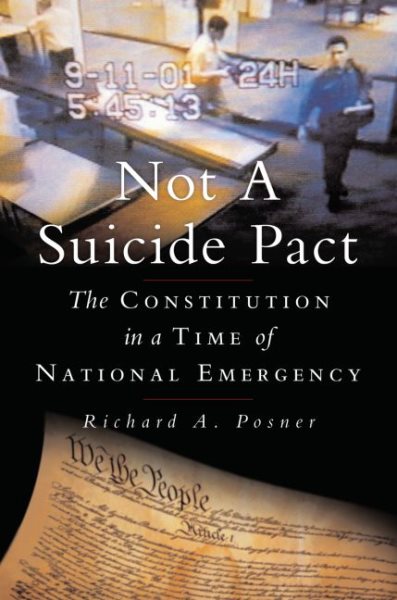 A cogent and elegant response to protests against measures taken by the Bush administration since 9/11 is offered in this exploration of how personal liberty must be balanced with public safety in the face of grave national danger. Read More
Eavesdropping on the phone calls of U.S. citizens; demands by the FBI for records of library borrowings; establishment of military tribunals to try suspected terrorists, including U.S. citizens--many of the measures taken by the Bush administration since 9/11 have sparked heated protests. In Not a Suicide Pact, Judge Richard A. Posner offers a cogent and elegant response to these protests, arguing that personal liberty must be balanced with public safety in the face of grave national danger.Critical of civil libertarians who balk at any curtailment of their rights, even in the face of an unprecedented terrorist threat in an era of proliferation of weapons of mass destruction, Posner takes a fresh look at the most important constitutional issues that have arisen since 9/11. These issues include the constitutional rights of terrorist suspects (whether American citizens or not) to habeas corpus and due process, and their rights against brutal interrogation (including torture) and searches based on less than probable cause. Posner argues that terrorist activity is sui generis--it is neither "war" nor "crime"--and it demands a tailored response, one that gives terror suspects fewer constitutional rights than persons suspected of ordinary criminal activity. Constitutional law must remain fluid, protean, and responsive to the pressure of contemporary events. Posner stresses the limits of law in regulating national security measures and underscores the paradoxical need to recognize a category of government conduct that is at once illegal and morally obligatory.One of America's top legal thinkers, Posner does not pull punches. He offers readers a short, sharp book with a strong point of view that is certain to generate much debate.OXFORD'S NEW INALIENABLE RIGHTS SERIESThis is inaugural volume in Oxford's new fourteen-book Inalienable Rights Series. Each book will be a short, analytically sharp exploration of a particular right--to bear arms, to religious freedom, to free speech--clarifying the issues swirling around these rights and challenging us to rethink our most cherished freedoms. Read Less

Goodreads reviews for Not a Suicide Pact: The Constitution in a Time of National Emergency (Inalienable Rights)

An Affair of State: The Investigation, Impeachment, and Tria...