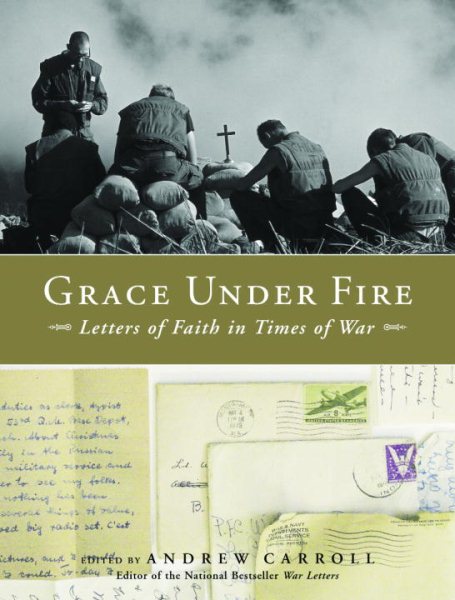 A heartening collection of correspondences between troops and their families, from the American Revolution through the fighting in Iraq, captures the spirit, humor, and courage of men and women in uniform and stresses the importance of faith. Read More
Words of wisdom, hope, humor, and strength from those who have been tested by fire and maintained their faith.The first book of its kind, Grace Under Fire is an inspiring and spiritual collection of letters and e-mails by U.S. troops and their families from the American Revolution through the War on Terrorism. Andrew Carroll, editor of the bestselling War Letters, went through his massive archive of seventy-five-thousand previously unpublished wartime correspondence to pick out the most intimate, dramatic, historic, and insightful letters and e-mails ever written about God, religion, and spirituality. The fifty best of these are featured in this incredible book, and they emphasize how extremely important faith has been, and continues to be, in the lives of U.S. troops and their families. What is especially remarkable about Grace Under Fire is the sheer diversity of the collection, which includes several extraordinary letters by two brothers who fought on opposing sides of the Civil War; a prophetic letter by Rabbi David Goode, one of the famed Immortal Chaplains who gave his life for his fellow soldiers; a lighthearted letter by a World War II nurse who met the Pope; and a profound and impassioned reply to the timeless question, “Where is God in wartime?” by a doctor serving in Iraq.Warfare can reveal the worst in human nature, but it can also bring out the best, and these correspondences are a testament to the heroism, compassion, grace, intelligence, and inherent goodness of American troops and their families. And although the letters and e-mails featured in this book were written in times of armed conflict, they transcend the subject of war. They are about determination, hope, patriotism, fighting for something greater than one’s self, and, of course, the enduring value of faith. Regardless of whether we have served in the military or not, we can all find inspiration and courage in these powerful and insightful words. Read Less

Goodreads reviews for Grace Under Fire: Letters of Faith in Times of War

Golden Opportunities: A Volunteer Guide for Americans over 5...

Behind the Lines: Powerful and Revealing American and Foreig...