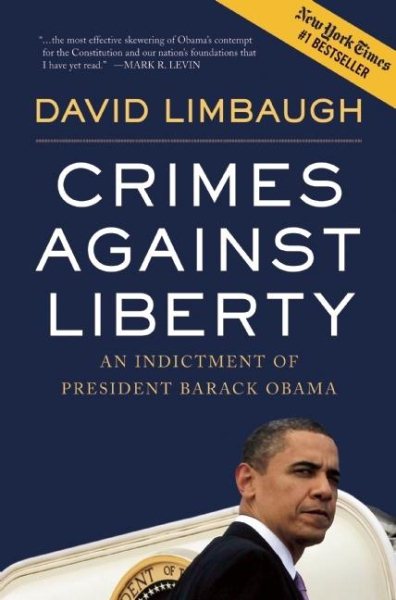 Charges that Barack Obama is pursuing an agenda that systematically undermines the Constitution and the personal liberty of American citizens, and cites specific examples of offenses against the rule of law, violations of the public trust, and betrayals of the national interest. Read More
As Americans, liberty is an inalienable right that is granted to us by God, protected by the Constitution, and upheld by our government. Yet, Barack Obama doesn’t seem to share that view. To him, liberty is a threat to the government’s power and something to be squashed by any means possible, as bestselling author David Limbaugh shows to devastating affect in his new book, Crimes Against Liberty. In Crimes Against Liberty, Limbaugh issues a damning indictment of President Barack Obama for encroaching upon and stripping us of our individual and sovereign rights. Laying out his case like he would a criminal complaint, Limbaugh presents the evidence—count-by-count—against Obama. From exploiting the financial crisis for political gain, to restricting our personal freedoms through invasive healthcare and “green” policies, to endangering America with his feckless diplomacy and reckless dismantlement of our national security systems, Limbaugh proves—beyond a reasonable doubt—that Obama is guilty of crimes against liberty. Comprehensive and compelling, this is Limbaugh’s most powerful book yet. Read Less

Goodreads reviews for Crimes Against Liberty: An Indictment of President Barack Obama

Jesus Is Risen: Paul and the Early Church

The True Jesus: Uncovering the Divinity of Christ in the Gos...

Jesus on Trial: A Lawyer Affirms the Truth of the Gospel