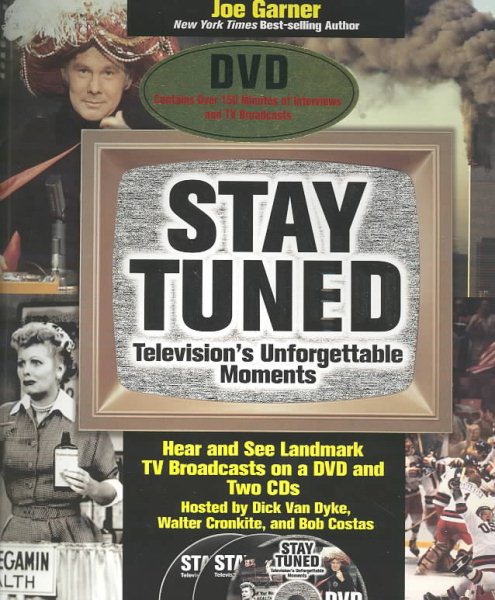 Highlights the most notable entertainment, news, and sports events in television history, from an "I Love Lucy" episode and Nixon's "Checkers" speech to Tiger Woods' first Masters victory and the September 11, 2001 terrorist attacks. Read More
For over 50 years, we have watched as television has entertained, informed, comforted, and thrilled us. We watched as sitcoms evolved from I Love Lucy to All in the Family: at first merely amusing, then becoming reflections of society and pushing the cultural boundaries. We watched President Kennedy, the first-born of television and politics, unite us in the optimism of his "new frontier" and in the grief of his assassination. Television has taken us to the scene of mass celebrations, such as the wedding of Lady Diana to Prince Charles, to calamities in Munich and New York, and into frightening fields of battle in Vietnam and Iraq. Television exposed the imperfections of the jurors' box in the trial of O.J. Simpson and the ballot box in Election 2000. Television put us in the front row when Hank broke Babe's record, when the U.S. hockey team beat the Soviets in Lake Placid, and when the NFL spilled over from Sunday afternoons to Monday nights. Over 50 years of memories-the stars, the programs, and the events stored in our hearts and imaginations like treasured heirlooms-are found in this new hardcover multimedia book from veteran New York Times best-selling author Joe Garner. In Stay Tuned, he has gathered 36 landmark moments from news, sports, and entertainment in a riveting anthology. Each story comes to life through detailed, behind-the-scenes accounts and firsthand anecdotes, and is illustrated with hundreds of poignant black-and-white and color photographs. The book's accompanying CDs and DVD feature the corresponding clips, narrated by Walter Cronkite for news, Bob Costas for sports, and (TK) for entertainment.TV's Unforgettable Moments is certain to become an important and lasting chronicle of the medium-and a best-seller in the process. Read Less