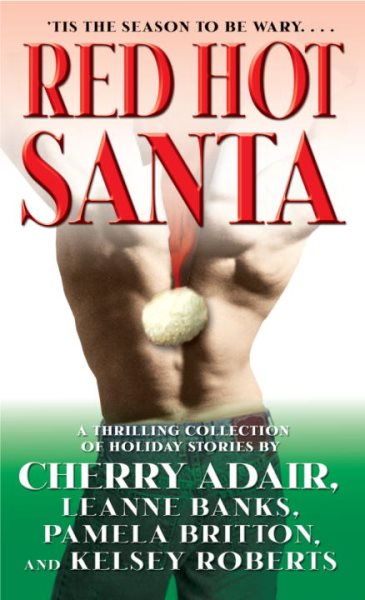 An anthology featuring four suspenseful holiday tales about secret agents from a covert agency on a mission to protect the innocent includes Cherry Adair's "Snowball's Chance," "Santa Slave" by Leanne Banks, "Big, Bad Santa" by Pamela Britton, and Kelsey Roberts's "Killer Christmas," in which department store CEO Meghan Beckham matches wits with a serial killer stalking her Santas. Original. Read More
This holiday season, four bestselling authors give the gift that keeps on giving: gripping tales of special agents in a covert agency, out to protect the innocent . . . by any means necessary.Snowball’s Chance by Cherry Adair–Kendall decks the halls, unaware that a serial killer has her on the top of his list. Of course, being naughty with the sexy good guy sent to protect her would be so nice.Santa Slave by Leanne Banks–After her best friend disappears, Hilary takes matters into her own hands and finds herself caught in the throes of danger, while a hunky male operative hopes to mix pleasure with business.Runaway Santa by Pamela Britton–Biologist Kaitlyn Moneypenny’s research is finally leading to a big scientific breakthrough . . . and mortal peril. When bullets start to fly, so do the sparks between Kaitlyn and her Santa-clad rescuer.Killer Christmas by Kelsey Roberts–When several Santas are murdered at a swanky department store, the new CEO, Meghan Beckham, had better watch out, had better not cry–because a serial killer has come to town. Read Less

So This Is Christmas

Love Song For A Raven / The Five-Minute Bride