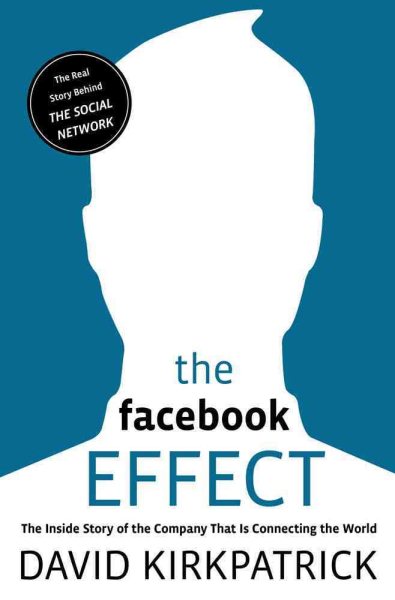 "An insider's history of the online social network traces the collaborations and conflicts among its founders, the personalities that shaped its development and the ways in which the site has become an integral part of today's culture." Read More
"Facebook is becoming the dominant social networking tool, facilitating our online and offline worlds. The Facebook Effect effectively shows its rapid evolution, where it is going, and how it will increasingly affect our lives."-Craig Newmark, founder of Craiglist"David Kirkpatrick recounts in fastidious and fascinating detail the breakneck development of this 21st-century phenomenon. Facebook's capacity to galvanize human behavior has already had vast and irreversible consequences for society, politics, and marketing. There will be many more to come-accompanied, it seems certain, by some degree of turbulence. It's a fascinating story-and it's only six years old."-Martin Sorrell, CEO, WPP Group"It's fun to read this amazing story of how Mark Zuckerberg created Facebook and made it huge worldwide. It's also a brilliant window into what it takes to be a successful internet entrepreneur."-Marc Benioff, Founder and CEO, Salesforce.comIn Little More Than Half A Decade, Facebook has gone from a dorm-room novelty to a company with 500 million users. It is one of the fastest growing companies in history, an essential part of the social life not only of teenagers but hundreds of millions of adults worldwide. As Facebook spreads around the globe, it creates surprising effectsùeven becoming instrumental in political protests from Colombia to Iran.Veteran technology reporter David Kirkpatrick had the full cooperation of Facebook's key executives in researching this fascinating history of the company and its impact on our lives. Kirkpatrick tells us how Facebook was created, why it has flourished, and where it is going next. He chronicles its successes and missteps, and gives readers the most complete assessment anywhere of founder and CEO Mark Zuckerberg, the central figure in the company's remarkable ascent. This is the Facebook story that can be found nowhere else.How did a nineteen-year-old Harvard student create a company that has transformed the Internet and how did he grow it to its current enormous size? Kirkpatrick shows how Zuckerberg steadfastly refused to compromise his vision, insistently focusing on growth over profits and preaching that Facebook must dominate (his word) communication on the Internet. In the process, he and a small group of key executives have created a company that has changed social life in the United States and elsewhere, a company that has become a ubiquitous presence in marketing, altering politics, business, and even our sense of our own identity. This is the Facebook Effect. Read Less

Goodreads reviews for The Facebook Effect: The Inside Story of the Company That Is Connecting the World

The Facebook Effect: The Inside Story of the Company That Is...

Code Talker: A Novel About the Navajo Marines of World War T...