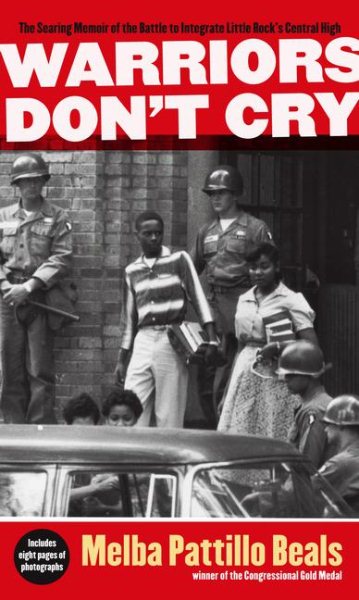 The author describes the threats and emotional abuse she endured from white student and adults along with her fears of endangering her family as she commited to being one of the first African American students to integrate Central High School in Little Rock, Arkansas in 1957. Read More
In this compelling autobiographical account by one of the Civil Rights Movement’s most powerful figures, Beals explores not only the power of racism, but also the ideas of justice and identity.In 1957, well before Martin Luther King’s “I Have a Dream” speech, Melba Pattillo Beals and eight other teenagers became iconic symbols for the Civil Rights Movement and the dismantling of Jim Crow in the American South as they integrated Little Rock’s Central High School in the wake of the landmark 1954 Supreme Court ruling, Brown v. Board of Education. Throughout her harrowing ordeal, Melba was taunted by her schoolmates and their parents, threatened by a lynch mob’s rope, attacked with lighted sticks of dynamite, and injured by acid sprayed in her eyes. But through it all, she acted with dignity and courage, and refused to back down. Warriors Don’t Cry is, at times, a difficult but necessary reminder of the valuable lessons we can learn from our nation’s past. It is a story of courage and the bravery of a handful of young, black students who used their voices to influence change during a turbulent time. Read Less

Warriors Don't Cry: A Searing Memoir of the Battle to Integr...

I Will Not Fear: My Story of a Lifetime of Building Faith un...