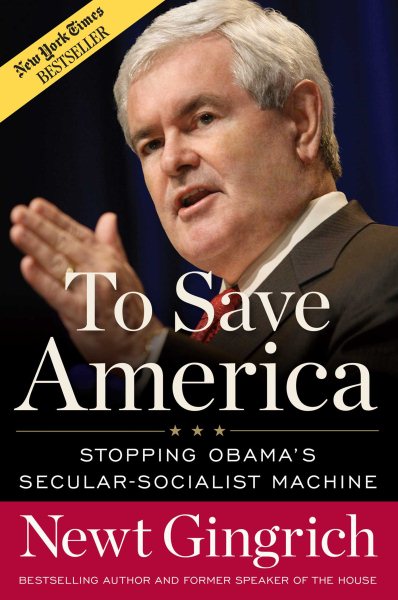 Argues that the Obama administration is committed to a secular-socialist ideology that threatens traditional American values, citing examples of big-government corruption and offering strategies for replacing failed policies. Read More
In his blockbuster new book, To Save America, former Speaker of the House and bestselling author Newt Gingrich issues a dire warning for America. By spending more than we can afford, sacrificing conservative values for the sake of easy answers, and electing the most liberal president ever, America is at risk for its very survival. Thanks to President Obama and his cohorts in Congress, we have become a country defined by massive government takeovers, rising debt, and failing national security systems. &#147;This is not the nation our Founding Fathers envisioned,” Gingrich says, &#147;America needs saving, and it’s up to us to do it.” In To Save America, Gingrich lays out a bold plan to put the United States back on track. Gingrich shows how Republicans can make a comeback in the 2010 mid-term elections, win the 2012 presidential election, and reveals how readers can help restore our nation to its fundamental values. Gingrich also argues that the big-spending, big-government programs, and bureaucracies of the secular socialist Left are the greatest threat to our nation’s survival since the Civil War. &#147;Our federal government is broken,” Gingrich states, &#147;we must &#145;replace, not reform’ our leaders and our policies, or America will no longer be the &#145;shining city upon a hill.’” Fresh, inspiring, and resolute, To Save America is Gingrich’s most powerful book yet. Read Less

Goodreads reviews for To Save America: Stopping Obama's Secular-Socialist Machine

Trump's America: The Truth about Our Nation's Great Comeback

Gettysburg: A Novel of the Civil War