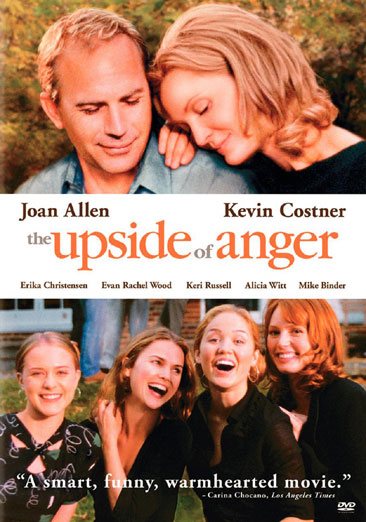 After her husband disappears, a woman and her children's lives are touched by the appearance of a former baseball star who befriends them. Read More
The Upside of Anger spans three years of a woman's life following her husband's sudden disappearance. Terry Wolfmeyer (Allen) goes from a paragon of sweetness to a volcano of rage in the wake of her husband's desertion; she thinks he has jetted off to Sweden with his Swedish secretary. Barely holding it together for her four daughters (played by Alicia Witt, Keri Russell, Erika Christensen and Evan Rachel Wood), Terry fitfully adjusts while befriending Denny Davies (Costner), a retired baseball player and radio personality up the street who shares her love of the all-day cocktail hour. As the three years pass, Terry and her daughters are confronted with varying individual situations, choices, and compromises, with moments that ring true in ways both moving and strikingly funny. Read Less