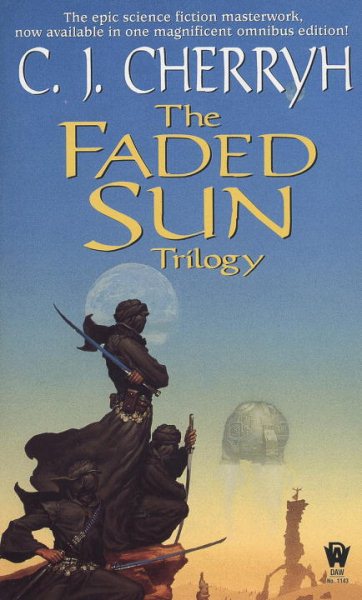 The mri race, indestructible until having finally met their match in a war against a new and powerful enemy, are in danger of extinction, leaving three individuals--a warrior, priestess, and human being--to recapture their domination. Read More
All three books in C.J. Cherryh's epic The Faded Sun trilogy, Kesrith, Shon'jir, and Kutath, collected in one volume.They were the mri—tall, secretive, bound by honor and the rigid dictates of their society. For aeons this golden-skinned, golden-eyed race had provided the universe mercenary soldiers of almost unimaginable ability. But now the mri have faced an enemy unlike any other—an enemy whose only way of war is widespread destruction. These "humans" are mass fighters, creatures of the herb, and the mri have been slaughtered like animals. Now, in the aftermath of war, the mri face extinction. It will be up to three individuals to save whatever remains of this devastated race: a warrior—one of the last survivors of his kind; a priestess of this honorable people; and a lone human—a man sworn to aid the enemy of his own kind. Can they retrace the galaxy-wide path of this nomadic race back through millennia to reclaim the ancient world that first gave them life? Read Less