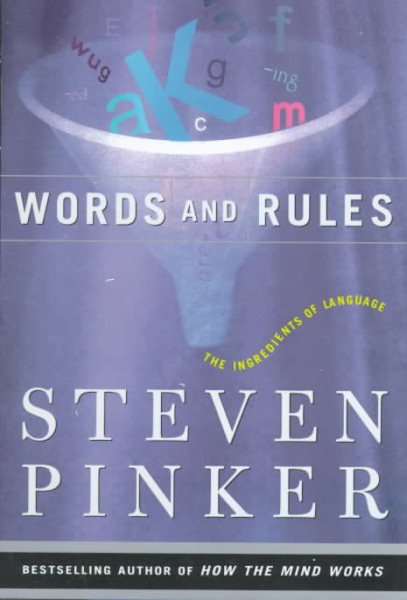 From the author of the bestselling The Language Instinct and How the Mind Works comes an engaging, often hilarious, always insightful look at the philosophy of language. Read More
Who other than MIT scientist Steven Pinker could explore a single linguistic phenomenon - the use of irregular verbs - from the vantage points of psychology, biology, history, philosophy, linguistics, and child development?In Words and Rules, Pinker answers questions about the miraculous human ability called language and does it in the gripping, witty style of his other bestsellers. As the stories unfold, the reader is immersed in the evolution of the English language over the centuries, the theories of Noam Chomsky and his critics, the simulation of neural networks on computers, the illuminating errors of children as they begin to speak, the tragic loss of language from neurological disease, and more illustrations using humorous wordplay than anyone would have thought possible. Pinker makes sense of all these phenomena with the help of a single powerful idea: that the essence of language is a mental dictionary of memorized words and a mental grammar of creative rules.Pinker is well known for his skills of explaining the art and science of language. His bestselling book How the Mind Works was nominated for the Pulitzer Prize and the National Book Award, and was the #1 bestselling book for amazon.com in 1997. His other bestseller The Language Instinct was named one of the Ten Best Books of 1994 by The New York Times Book Review and nominated for the William James Book Award by the American Psychological Association. Read Less

Goodreads reviews for Words And Rules: The Ingredients Of Language (Science Masters Series)

Enlightenment Now: The Case for Reason, Science, Humanism, a...

The Better Angels of Our Nature: Why Violence Has Declined