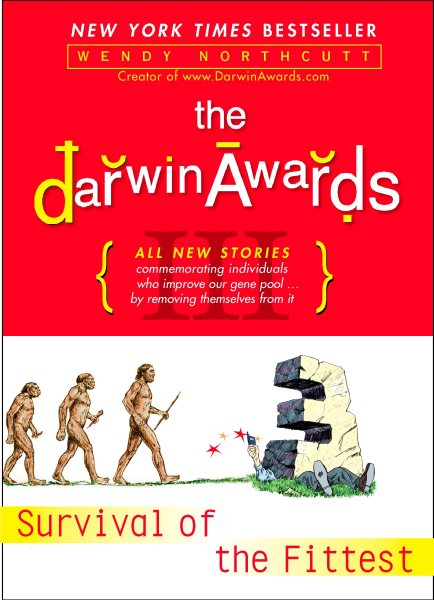 A third collection of misadventures of people who have lost their lives by engaging in questionable activities includes the stories of a sheriff who shot himself twice and an artist who made a necklace using live ammunition. Read More
The hilarious New York Times bestselling phenomenon—more than 1.5 million copies sold! Honoring those who improve our gene pool by inadvertently removing themselves fromit, The Darwin Awards III includes more than one hundred brand new, hilariously macabre mishaps and misadventures. From a sheriff who inadvertently shot himself twice, to the insurance defrauder who amputated his leg with a chainsaw; from a farmer who avoided bee stings by sealing his head in a plastic bag to the man crushed by the branch he just trimmed, The Darwin Awards III proves again that when it comes to stupidity, no species does it like we do.Featuring scientific and safety discussions and filled with illustrations depicting inspiring examples of evolution in action, The Darwin Awards III shows once more how uncommon common sense still is. Read Less

Goodreads reviews for The Darwin Awards III: Survival of the Fittest

The Darwin Awards: Evolution in Action

The Darwin Awards Countdown to Extinction