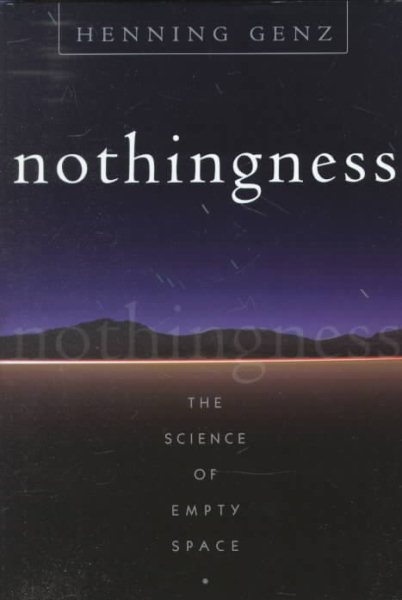 Examines the metaphysical musings of ancient Greek philosophers, Newton's theories, and the modern concepts of quantum physics and cosmology Read More
This is a wonderful book on one of the most puzzling problems of physics and philosophy: Does empty space have an existence independent of the matter within it? Einstein thought not. In his universe, there can be no space without matter; but quantum physicist Werner Heisenverg’s famous “uncertainty principle” allows for the spontaneous, though fleeting, creation and destruction of fundamental particles from empty space. As physicist Henning Genz shows, “empty space” is really not empty at all; in fact it is an ocean seething with the creation and destruction of subatomic particles. Through the use of crystal-clear prose and over a hundred cleverly rendered and exceptionally instructive illustrations, Genz takes the reader from the metaphysical speculations of the ancient Greek philosophers, through the theories of Newton and the early experiments of his contemporaries, right up to the latest theories of quantum physics and cosmology.Some of the most delightful episodes of the book consist of early experiments on the vacuum, from teams of horses trying in vain to pull apart two iron hemispheres joined only by a vacuum, to more sophisticated ones involving water and air. These and many other fascinating investigations of the deep and exciting new physics of quantum mechanics and cosmology reveal incredible properties of the interplanetary and interstellar vacuum.While some of man’s ideas about the vacuum of outer space have been treated sporadically in other books, this is the first book for the nonscientist on a much neglected yet incredibly interesting segment of modern physics and timeless philosophy. It will delight and inform everyone interested in the latest concepts in physics, as well as the philosophical implications of scientific discoveries. Read Less

Nothingness: The Science Of Empty Space