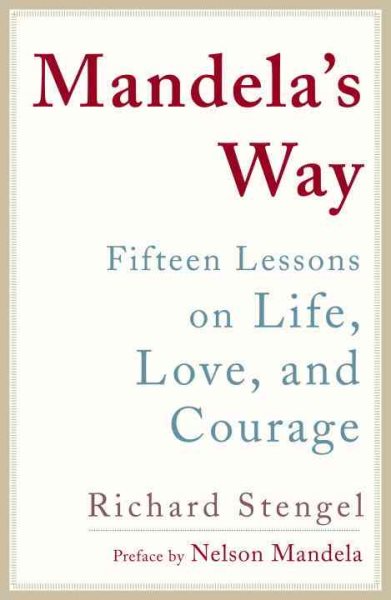 "Time" magazine editor Stengel, who collaborated with Mandela on his bestselling autobiography, distills Mandela's wisdom into 15 vital life lessons that have the power to deepen lives. Read More
A compact, profoundly inspiring book that captures the spirit of Nelson Mandela, distilling the South African leader’s wisdom into 15 vital life lessonsWe long for heroes and have too few. Nelson Mandela, who died in 2013 at the age of ninety-five, is the closest thing the world has to a secular saint. He liber­ated a country from a system of violent prejudice and helped unite oppressor and oppressed in a way that had never been done before. Now Richard Stengel, the editor of Time maga­zine, has distilled countless hours of intimate conver­sation with Mandela into fifteen essential life lessons. For nearly three years, including the critical period when Mandela moved South Africa toward the first democratic elections in its history, Stengel collaborated with Mandela on his autobiography,Long Walk to Freedom, and traveled with him everywhere. Eating with him, watching him campaign, hearing him think out loud, Stengel came to know all the different sides of this complex man and became a cherished friend and colleague.In Mandela’s Way, Stengel recounts the moments in which “the grandfather of South Africa” was tested and shares the wisdom he learned: why courage is more than the absence of fear, why we should keep our rivals close, why the answer is not always either/or but often “both,” how important it is for each of us to find something away from the world that gives us pleasure and satisfaction—our own garden. Woven into these life lessons are remarkable stories—of Mandela’s child­hood as the protégé of a tribal king, of his early days as a freedom fighter, of the twenty-seven-year imprison­ment that could not break him, and of his fulfilling remarriage at the age of eighty.This uplifting book captures the spirit of this extraordinary man—warrior, martyr, husband, statesman, and moral leader—and spurs us to look within ourselves, reconsider the things we take for granted, and contemplate the legacy we’ll leave behind. Read Less

Information Wars: How We Lost the Global Battle Against Disi...

You're Too Kind: A Brief History of Flattery