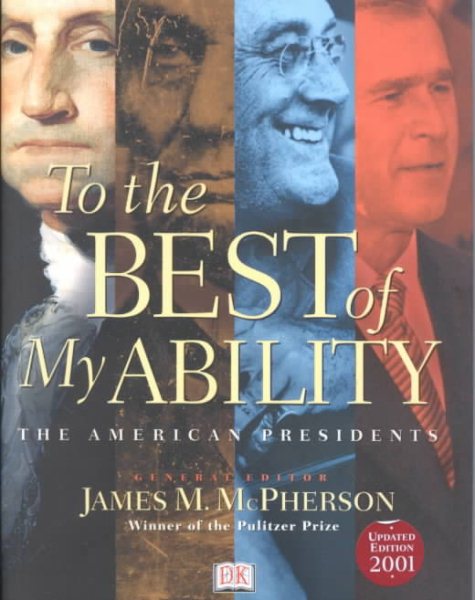 An illustrated look at the forty-two men who have served as President of the United States describes the campaigns, elections, administration, events, and legacy of each of America's leaders, from Washington to Clinton. Read More
Every generation of historians reviews and revises the work of its predecessors. With this book, the best historical writers of today's generation undertake such a task. Displaying wit and narrative flair, their elegant essays offer a fresh perspective on the most fascinating group of Americans: the American presidents. Who better to write a new assessment of the presidents than the most respected (and best-selling) historians of our time? In To the Best of My Ability: The American Presidents, members of the prestigious Society of American Historians deliver engaging, thoughtful analyses of the forty-one men who have led this country- some, of course, more successfully than others. In this copiously illustrated volume, edited by Pulitzer Prize-winner James M. McPherson, you will learn from Gordon S. Wood how George Washington, an extraordinary man, made it possible for ordinary men to govern; from Allen Weinstein how Theodore Roosevelt tested and extended the limits of the presidency; from Tom Wicker how Richard Nixon's hatreds and insecurities gripped him ever more tightly as he achieved his long-sought goal of power; and from Evan Thomas how much Bill Clinton cares about his place in the new presidential pecking order. Read Less

Goodreads reviews for To the Best of My Ability: The American Presidents

The American Heritage New History of the Civil War

To the Best of My Ability: The American Presidents