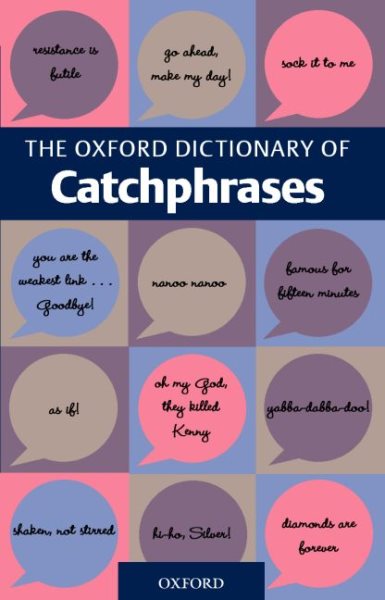 Provides the history and usage of over eight hundred catchphrases from the twentieth-century drawn from television and radio shows, songs and music, films, and books. Read More
Have you ever considered how a single line from a movie or a television advertisement spreads to become a ubiquitously popular expression? Do you know the origin of such phrases as "keeping up with the Joneses" and "a man's gotta do what a man's gotta do"? Are you often stumped when trying to remember the source of a line from a movie or an advertising slogan? The Oxford Dictionary of Catchphrases is the answer to the frequently asked questions "What's that from?" and "Who said that?" and offers a lively exploration of the history and usage of these common and timeless expressions. From "you talkin' to me?" to "melts in your mouth, not in your hand" to "see you later, alligator," this entertaining book provides a comprehensive selection of our best-loved catchphrases, paying homage to the human nature of adopting a common bond through language. A special Source Information section gives a background description of the shows, films, or books that are cited often, and a Source Index allows readers to look up entries from a particular source. With the most up-to-date entries, The Oxford Dictionary of Catchphrases offers an intriguing and fun tour of common language and is ideal for armchair linguists as well as all film, television, and popular culture junkies. Read Less

Goodreads reviews for The Oxford Dictionary of Catchphrases

The Junction Boys: How Ten Days in Hell with Bear Bryant For...

Beyond the Burning Lands (The Swords of the Spirits Trilogy)