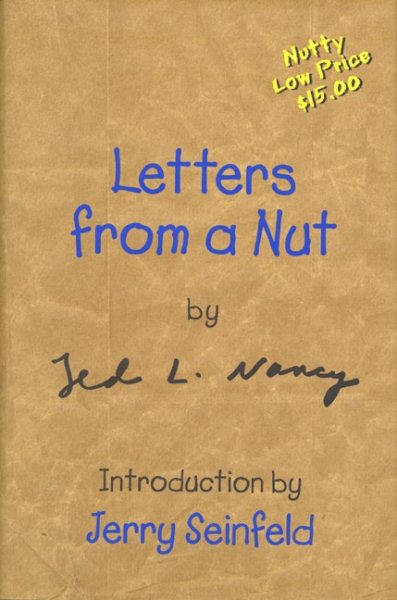 A collection of humorous corrrespondences encompasses the prank letters of the author to celebrities, politicians, and corporate heads, many of which were taken seriously and responded to by their recipients Read More
Who is Ted L. Nancy?He's a concerned hotel guest searching for a lost tooth... He's a superstitious Vegas high-roller who wants to gamble at a casino in his lucky shrimp outfit... He's the genius inventor of "Six Day Underwear"... He's a demanding dramatist seeking an audience for his play about his 26-year-old dog, Cinnamon... He's the proud owner of Charles, a 36-year-old cat who owes his longevity to a pet food company... He's a loyal fan of the King of Tonga... He is, in reality, a twisted prankster -- a supremely off-kilter alter ego who sends patently ridiculous letters and queries to (and receives surprisingly earnest responses back from) corporate honchos, entertainment conglomerates, national publications, politicians, celebrities and heads of state to everyone, in fact, from the president of the Bon Ami Cleanser Company to U.S. Vice President Al Gore.   Letters From A Nut is an insanely inspired, truly madcap collection of Nancy correspondence, a laugh-out-loud-in-public-places aggregation of official -- and officially certifiable -- requests, complaints, fan mail and questions that could not possibly have been taken seriously...but, amazingly, were! Dear Mr. Nancy:"It is not often that we receive such enthusiastic support for the paper bag." --The Paper Bag Council "On behalf of Greyhound, there should be no problem traveling while in your butter costume." --Greyhound Bus Lines"I look forward to working with you to create a better future for this great nation." -- Vice President Al Gore "An unending stream of some of the most hilarious exchanges I've ever read. Everyone I lent this book to just read it and laughed out loud like I did. It's so simple, yet totally inventive. I'm sure some sort of mail fraud charges could be brought to stop this man but, personally, I hope they never catch him." --Jerry Seinfeld Read Less

Goodreads reviews for Letters from a Nut

More Letters from a Nut

All New Letters from a Nut: Includes Lunatic Email Exchanges