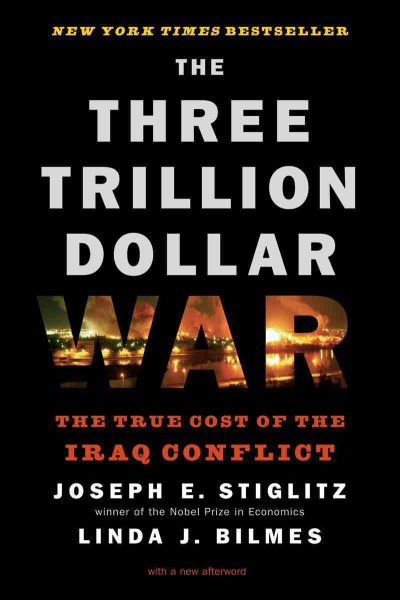 The true cost of the Iraq War is $3 trillion—and counting—rather than the $50 billion projected by the White House. Read More
When Larry Lindsey, then head of the National Economic Council, estimated in 2002 that the looming war on Iraq might cost as much as $200 billion, his numbers were dismissed as "baloney" by Secretary of Defense Rumsfeld, who suggested that the war would cost as little as $50-$60 billion. Lindsey was in fact off by a far margin, according to Stiglitz (a Nobel Laureate in economics and chief economist for the World Bank) and Bilmes (Kennedy School of Government, Harvard U.), but contra Rumsfeld, Lindsey's numbers were far too low. Using what they say are conservative assumptions they estimate the eventual total costs of the war as more than $3 trillion, 50 times the number suggested by Rumsfeld. They arrive at this estimate by taking into account total relevant appropriations/expenditures to date for military operations, "operational expenditures" and savings hidden elsewhere in the defense budget, inflation and the "time value" of money, future direct and hidden operational expenditures, future and current costs of disability and health care for returning veterans, future costs of restoring the military to prewar strength, budgetary costs to other parts of government, interest on US debt attributable to the war, opportunity costs to the economy, and macroeconomic impact from higher oil prices and larger deficits. In addition to explaining how they arrived at their estimate, they also issue a call for withdrawal from Iraq and recommend reforms for properly understanding and dealing with the financial costs of future wars. Annotation ©2008 Book News, Inc., Portland, OR (booknews.com) Read Less

Goodreads reviews for The Three Trillion Dollar War: The True Cost of the Iraq Conflict

Globalization and Its Discontents Revisited: Anti-Globalizat...

The Price of Inequality: How Today's Divided Society Endange...

The Great Divide: Unequal Societies and What We Can Do About...