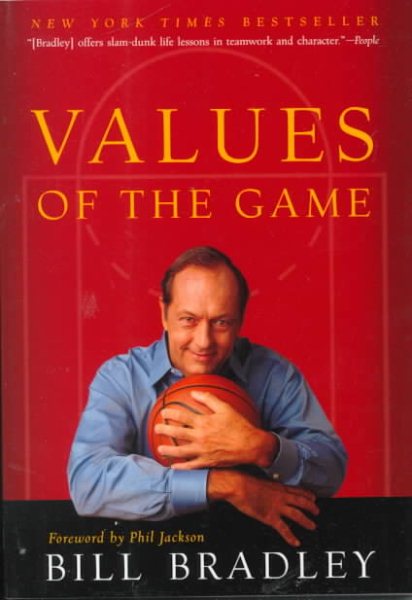 The former U.S. Senator and member of two championship New York Knicks teams revisits his first career in a series of observations and reflections that illustrate how the "right stuff" on the court is a proving ground for the "right stuff" in life Read More
As the Presidential run heats up with the start of the primary season in New Hampshire on February 2, the attention to the candidates and their issues will become even more intense. Values of the Game is an ideal book to understand Bill Bradley, the man and the candidate. The values that Bill speaks of so frequently during his campaign speeches are reflected in Values of the Game--responsibility, discipline, passion, selflessness and respect.Bill Bradley, candidate for the Democratic presidential nomination for 2000, former U.S. senator from New Jersey from 1979 to 1997, and a member of two championship New York Knicks teams, returns to the scene of his first career and his first great passion, basketball.Things have changed since Bradley's championship days, but what separates winners and losers remains very much the same: No collection of players, no matter how good, can win unless they form a team. And no team can succeed unless it shares common values, among them courage, discipline, resilience, respect, and an unmitigated passion for the game. In this highly acclaimed and bestselling book, Bill Bradley offers his vision for how the principles he developed playing basketball can be applied to everyday life, be it at the office, at home, in public life--indeed, in any situation where values matter.In ten essays, filled with intensely personal observations and reflections, Bradley revisits the basketball court with the fire of the competitor and the eye of the writer and explores these qualities in action: the dynamics of teammates on the court and off, the individual courage to risk the last-second shot, the responsibility to teammates, coaches, and fans to stay in shape, play hard, and honor the game. Values of the Game is one man's vision for a better world, and is a lasting statement of principle and commitment from one of our country's finest leaders. Read Less

Goodreads reviews for Values of the Game

Life on the Run

Time Present, Time Past: A Memoir