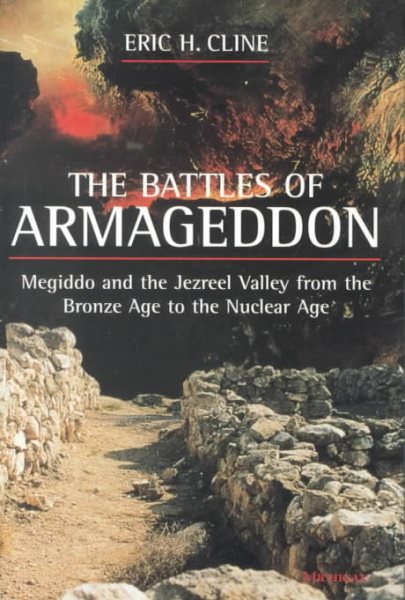 One site. Thirty battles over four thousand years. Egyptians, Crusaders, Mongols, Israelis Read More
<div><div><b>WINNER </b><br><b>>   Best Popular Book on Archaeology </b><br><b>        --<i>Biblical Archaeology Society</i></b><br>Apocalypse. Judgment Day. The End Time. Armageddon. Students of the Bible know it as the place where the cataclysmic battle between the forces of good and the forces of evil will unfold. Many believe that this battle will take place in the very near future. But few know that Armageddon is a real place--one that has seen more fighting and bloodshed than any other spot on earth.<br>The name Armageddon is a corruption of the Hebrew phrase <i>Har Megiddo</i>, and it means "Mount of Megiddo." More than thirty bloody conflicts have been fought at the ancient site of Megiddo and adjacent areas of the Jezreel Valley during the past four thousand years. Egyptians, Israelites, Greeks, Muslims, Crusaders, Mongols, British, Germans, Arabs, and Israelis have all fought and died here. The names of the warring leaders reverberate throughout history: Thutmose III, Deborah, Gideon, Saul and Jonathan, Jezebel, Saladin, Napoleon, and Allenby, to name but the most famous. Throughout history Megiddo and the Jezreel Valley have been ground zero for battles that determined the very course of civilization. No wonder that the author of Revelation believed Armageddon, the penultimate battle between good and evil, would also take place here!<br><i>The Battles of Armageddon</i> introduces readers to a rich cast of ancient and modern warriors, while bringing together for the first time the wide range of conflicts that have been fought at Megiddo and the Jezreel Valley from the Bronze Age to the Nuclear Age.<br>Eric H. Cline has participated in more than seventeen seasons of excavation and survey in Israel, Egypt, Jordan, Greece, and the United States. He is currently a Senior Staff Archaeologist at the ongoing excavations of Megiddo.<br></div></div> Read Less

Goodreads reviews for The Battles of Armageddon: Megiddo and the Jezreel Valley from the Bronze Age to the Nuclear Age

From Eden to Exile: Unraveling Mysteries of the Bible

The Man Who Laughed At Murder