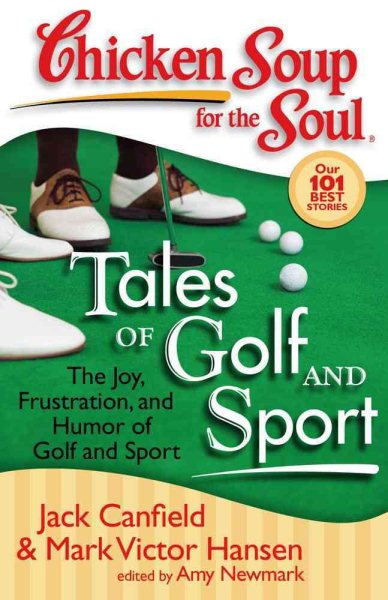 A collection of 101 of the best stories about golf and sport from Chicken Soup's library, written by golfers and other athletes about golf and other sports. Includes stories about coaching kids and participating in sports with kids. Read More
1.  This is the first Chicken Soup book about golf for men and women since 2002.  Previous golf books have sold more than 1.5 million copies in aggregate.2.  Books represent a new thematic experience, even for readers of past books, as Chicken Soup has tightened the content, and books contain only relevant stories.  Out-of-date stories were eliminated. 3.  Each book contains 101 stories recompiled from dozens of past Chicken Soup titles. 4.  “Our 101 Best Stories” collection is an efficient way for new readers to obtain books covering Chicken Soup’s most popular topics. 5.  Every book has a warm and moving foreword from Jack Canfield and Mark Victor Hansen explaining the company’s rebirth and its return to 101 stories per book. 6.  Chicken Soup for the Soul earned the Guinness World Record for having the most books on the New York Times bestseller list at one time. 7.  Last year, USA Today named Chicken Soup for the Soul #5 on its list of 25 books that left a legacy over the past quarter century.Golfers are a special breed.  They endure bad weather, early wake up calls, great expense, and "interesting" clothing to engage in their favorite sport.  This new volume contains Chicken Soup's 101 best stories and poems about golfers, golfing, and a few stories about other sports and athletes.   The first Chicken Soup for the Soul book was published in 1993, and became a publishing industry sensation, ultimately selling eight million copies.  Since then, more than 150 Chicken Soup titles have been published, selling more than 100 million copies. Chicken Soup for the Soul has won dozens of awards over the past 15 years, and its founders, Jack Canfield and Mark Victor Hansen have become celebrity motivational speakers and authors. Read Less

Chicken Soup for the Soul Christmas Treasury for Kids: A Sto...

Chicken Soup for the Soul: Here Comes the Bride: 101 Stories...