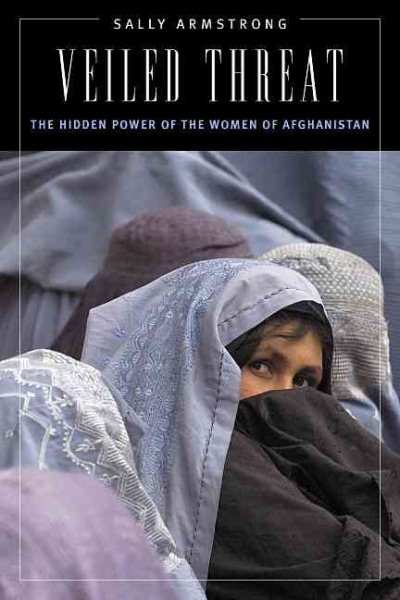 Afghan women victimized by the Taliban share their stories, discussing the dynamics of women's rights in Afghanistan, secret efforts to provide women with education and health care, and the political distortion of Islamic values. Read More
The women of Afghanistan lived a five-year nightmare under the Taliban regime. In Veiled Threat, Sally Armstrong introduces several of these women?including the deputy prime minister of Afghanistan, Dr. Sima Samar?who describe the living hell they experienced as well as the quiet rebellion?clandestine schools for girls and health clinics for women?that took place in an effort to subvert the Taliban's hateful edicts.One of the first Western journalists to visit Afghanistan, Armstrong gives us an insider's view of the deplorable situation. She also provides a broader perspective, leading us through the history of Afghanistan, including the ebb and flow of women's rights. She examines what the Koran actually says about women. She points a finger at the international community for accepting women's oppression in the name of culture, and she accuses the Taliban and other fundamentalist leaders of distorting Islam for political opportunism.While there have been other books about the women in Afghanistan, VEILED THREAT holds a unique position. There have been two autobiographies: ZOYA'S STORY and MY FORBIDDEN FACE; a photo book, UNVEILED; and a book about RAWA (Revolutionary Association of the Women of Afghanistan) called VEILED COURAGE. VEILD THREAT is much broader in its approach. Read Less

Goodreads reviews for Veiled Threat: The Hidden Power of the Women of Afghanistan

Uprising: A New Age Is Dawning for Every Mother's Daughter

The Lonely Side of the River