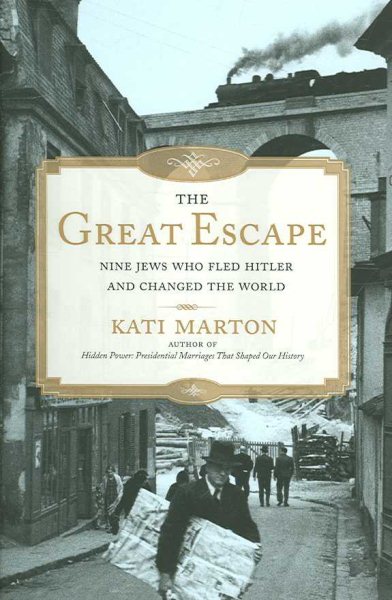 Traces the early twentieth century journey of nine prominent men from Budapest who fled fascism to seek sanctuary in America, where they made pivotal contributions to science, film, and photojournalism. Read More
In this ground-breaking book, acclaimed author Kati Marton brings to life an unknown chapter of World War II: the tale of nine men who grew up in Budapest's brief Golden Age, then, driven from Hungary by anti-Semitism, fled to the West, especially to the United States, and changed the world. These nine men, each celebrated for individual achievements, were actually part of a unique group who grew up in a time and place that will never come again. It is Marton's extraordinary achievement to trace what for a few dazzling years was common to all of them -- the magic air of Budapest -- and show how their separate lives and careers were, in fact, all shaped by Budapest's lively café life before the darkness closed in. Marton follows the astonishing lives of four history-changing scientists, all just one step ahead of Hitler's terror state, who helped usher in the nuclear age and the computer (Edward Teller, John von Neumann, Leo Szilard, and Eugene Wigner); two major movie myth-makers (Michael Curtiz, who directed Casablanca, and Alexander Korda, who produced The Third Man); two immortal photographers (Robert Capa and Andre Kertesz); and one seminal writer (Arthur Koestler, Darkness at Noon).Marton follows these brilliant products of Budapest's Golden Age as they flee fascism in the 1920s and 1930s en route to sanctuary -- and immortality. As the scientists labor in the secret city of Los Alamos in the race to build the atom bomb, Koestler, once a communist agent imprisoned by Franco, writes the most important anticommunist novel of the century. Capa, the first photographer to go ashore on D-Day, later romances Ingrid Bergman and is acknowledged as the world's greatest war photographer before his tragic death in Vietnam. Curtiz not only gives us Casablanca, consistently voted the greatest romantic movie ever made, but also discovers Doris Day and directs James Cagney in the quintessential patriotic film, Yankee Doodle Dandy. Ultimately, The Great Escape is an American story and an important, previously untold chapter of the tumultuous last century. Yet it is also a poignant story -- in the words of the great historian Fritz Stern, "an evocation of genius in exile . . . an instructive, moving delight." An epilogue relates the journey into exile of three members of the next generation of Budapest exiles: financier-philanthropist George Soros, Intel founder Andy Grove, and 2002 Nobel laureate in literature Imre Kertesz. Read Less

Goodreads reviews for The Great Escape: Nine Jews Who Fled Hitler and Changed the World