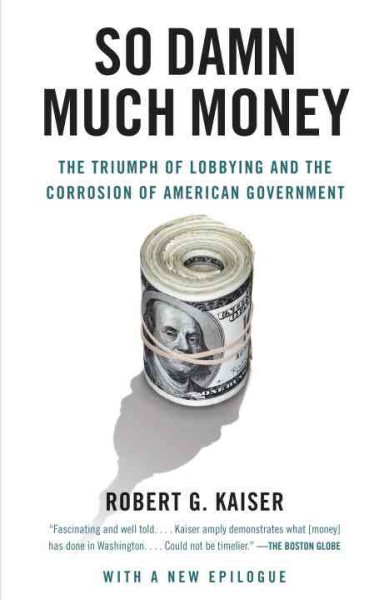 Examines the growth of the political lobby and its implications for American politics, detailing the growing influence of the federal government in every facet of life, the organized special interest groups and their role in shaping policy and funding elections and how lobbyists have undermined government efforts. Reprint. Read More
With a New ForewordIn So Damn Much Money, veteran Washington Post editor and correspondent Robert Kaiser gives a detailed account of how the boom in political lobbying since the 1970s has shaped American politics by empowering special interests, undermining effective legislation, and discouraging the country’s best citizens from serving in office. Kaiser traces this dramatic change in our political system through the colorful story of Gerald S. J. Cassidy, one of Washington’s most successful lobbyists. Superbly told, it’s an illuminating dissection of a political system badly in need of reform. Read Less

Goodreads reviews for So Damn Much Money: The Triumph of Lobbying and the Corrosion of American Government

Russia : The People and the Power