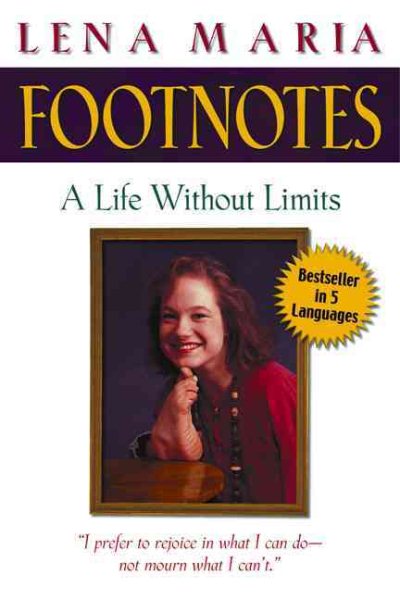 In an uplifting, inspirational memoir, a young woman born with severe deformities describes how her remarkable determination, unshakable Christian faith, and loving support of her family have led her to become a professional singer and champion swimmer. Original. 50,000 first printing. Read More
Born in Sweden to loving Christian parents eager to cherish their first-born child, Lena Maria Johansson was especially blessed from the start. But, at first, her parents despaired: Their beloved baby girl emerged drastically deformed, without arms and with only one fully formed leg and foot, the other leg markedly shorter and mis­shapen. Yet, Lena's parents were not to be daunted. Their love for their daughter knew no bounds. Lena's father's response when he saw his daughter for the first time was, "Arms or no arms, she will need a home anyway." Thus, with compassion and abiding love but never pity, the Johanssons raised the remarkable girl who is today Lena Maria Klingvall, a woman of indomitable spirit and unshakable faith.Fueled by her parents' unceasing confidence in her, Lena learned to use her feet to do all kinds of things, from basic self-care, to playing keyboards and driving a car. From early on, Lena refused "special" status, preferring instead to learn how to accomplish things her own way. In her own words, "I prefer to rejoice in what I can do —not mourn what I can't." In that spirit, Lena has not only learned to play keyboards and drive a car, but also to conduct a choir, develop a successful professional singing career and compete in the Paralympics in Seoul, Korea.This uplifting personal story, written by a one-of-a-kind woman who wholeheartedly believes that God her Creator never makes mistakes, is sure to not only inspire you, but also forever change the way you look at life. Read Less

Goodreads reviews for Footnotes: A Life Without Limits

A View of Society and Manners in Italy