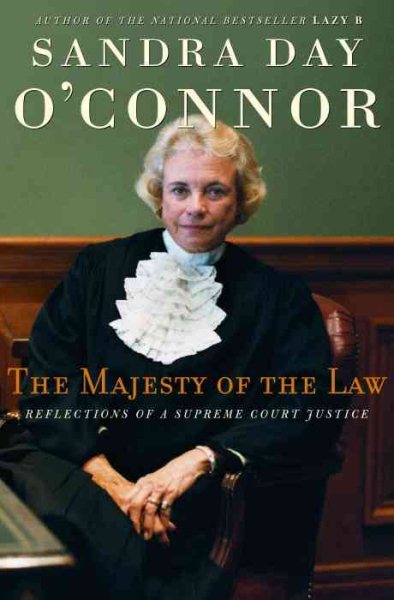 The first female justice on the United States Supreme Court provides a history of the American legal system, discussing landmark cases that have shaped American democracy and her own experiences as a justice. Read More
In The Majesty of the Law, Supreme Court Justice Sandra Day O’Connor explores the law, her life as a Justice, and how the Court has evolved and continues to function, grow, and change as an American institution. Tracing some of the origins of American law through history, people, and ideas, O’Connor sheds new light on the basics, and through personal observation she explores the development of institutions and ideas we have come to regard as fundamental. O’Connor discusses notable cases that have shaped American democracy and the Court as we know it today, and she traces the turbulent battle women have fought for a place in our nation’s legal system since America’s inception. Straight-talking, clear-eyed, inspiring, The Majesty of the Law is more than a reflection on O’Connor’s own experiences as the first female Justice of the Supreme Court; it also contains a discussion of how the suffrage movement changed the lives of women—in voting booths, jury boxes, and homes across the country. In The Majesty of the Law, Sandra Day O’Connor reveals some of what she has learned and believes about American law and life, insights gleaned over her years as one of the most powerful and inspiring women in American history. Read Less

Goodreads reviews for The Majesty of the Law: Reflections of a Supreme Court Justice