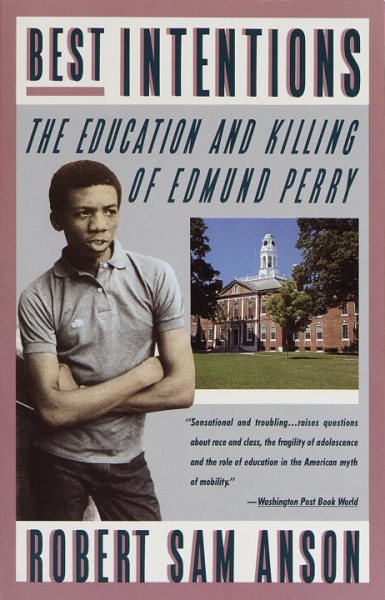 Explores the paradoxes of the life of Edmund Perry, a lonely, vulnerable Black honor student at Phillips Exeter Academy, who preached Black nationalism and who was shot and killed on a Manhattan street by a policeman Read More
A complex, poignant exploration of racial attitudes in America, as illumined by the case of Edmund Perry. Perry, a seventeen-year-old black honors student from Harlem, was fatally shot by a young white plainclothes policeman in 1985 in an alleged mugging attempt. Perry had recently graduated from Philips Exeter Academy and was to attend Stanford University that fall. The shooting and the subsequent case, in which Edmund's elder brother Jonah, an undergraduate at Cornell University, was accused, tried, and found not guilty, drew national headlines and was the subject of heated debate among black and white communities alike. Using interviews with Perry's parents, friends, and former teachers in Harlem and at Exeter, journalist Robert Sam Anson has written a compelling account of a boy caught between two worlds and a profound portrait of the state of race in America. Read Less

Goodreads reviews for Best Intentions: The Education and Killing of Edmund Perry

They've killed the President!: The search for the murderers...