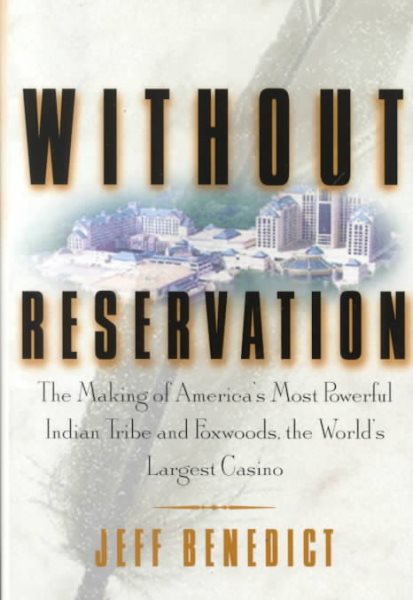 The author of Public Heroes describes the rise to power of the Mashantucket Pequot tribe as it built and operated Foxwoods, the world's largest casino, on land near the small Connecticut town of Ledyard, offering an objective account based on hundreds of interviews, court documents, congressional transcripts, correspondence, and other records. Read More
In 1973, an old American Indian woman dies with nothing left of her tribe but a trailer and a two-hundred-acre reservation in the sleepy backyard of Ledyard, Connecticut. It seems to signal the end of the Mashantucket Pequot tribe. But it is just the beginning. Over the course of the next three decades, the reservation grows to more than two thousand acres and becomes home to Foxwoods, the largest casino in the world, grossing more than $1 billion per year. The Pequots are reborn, immensely wealthy, and in possession of an enormous amount of political influence.How did it happen?In compelling detail, Without Reservation tells the stunning story of the rise of the richest tribe in American history.It begins with the grand ambitions of two men. One, an unemployed navy brat and outsider, is a failed preacher with the uncanny ability to charm; the other is fresh out of law school and armed with a brilliant legal theory to help impoverished Indian tribes. Together they resurrect the Pequots and battle the local townspeople to aggressively expand their reservation, taking on the state government for the right to gamble on their land. Embracing their cause are misguided and misinformed government officials and a former mob prosecutor who brings Malaysian financiers to the table.The Pequots must also contend with the price of power. Without Reservation reveals the mysterious roots of today's Pequot tribe, the racial tension that divides them, and the Machiavellian internal Power struggle over who will control the tribe's purse strings.This is a story of the duality of the American dream, the good and the bad that come with enormous wealth. Author Jeff Benedict shines a light on the dreamers and the deal makers, the backroom politicking and courtroom machinations, the trusts and betrayals, and the world of high-powered attorneys, politicians, tribal leaders, and financiers who made the Pequots what they are today.As compelling as a novel, Without Reservation is must reading for anyone interested in the way today's world really works. Read Less

Goodreads reviews for Without Reservation: The Making of America's Most Powerful Indian Tribe and Foxwoods the World's Largest Casino

The System: The Glory and Scandal of Big-Time College Footba...

The System: The Glory and Scandal of Big-Time College Footba...

My Name Used to Be Muhammad: The True Story of a Muslim Who...