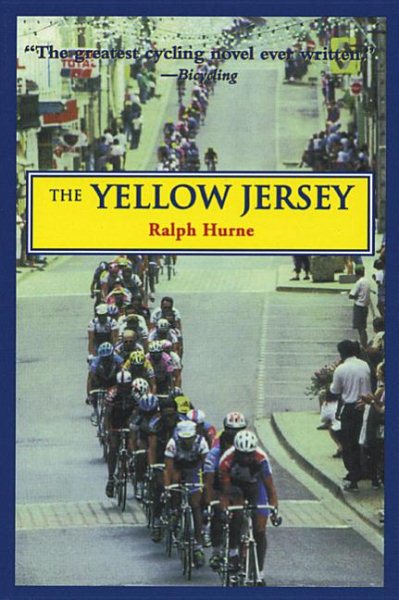 A novel of the Tour de France, in which an average rider has a moment of glory and hope. Read More
The greatest cycling novel ever written. . . . An underground classic. . . . A bicycling book that follows a different course—one with characters you can relate to, whose actions raise questions about life on and off the bicycle. . . . The heart of The Yellow Jersey is the Tour de France itself, which serves as a metaphor for life.—Bicycling Magazine"This is sports fiction at its very best. Mr. Hurne has a cool, downbeat style descended from Lardner and Hemingway, and a fine hand with the hairpins turns of suspense."—The New York Times Book Review"Full of wit, charm, excitement, and intelligence."—Publishers WeeklyAn excerpt from the novel:It's a funny sort of stage. Everyone seems to be waiting for Romain to attack. Van Faignaert, as I expected, is taking things easy and trying to keep the bunch together. Butch Cassidy's not a bad climber and on the Col de Foreyssasse he has a go, but the Belgian team swoops and soon has him under control. I can see on the faces of the spectators that they are disappointed. They've turned out in their thousands expecting this to be It; I feel like shouting to them to go home and come back tomorrow. We get strung out a bit coming down the Foreyssasse but regroup at the bottom. The ominous threat of Romain taking off, coupled with the strong control of the race by the Belgian team, who're doing their damnedest to keep everyone in one lump, has really put the mockers on things.I'm just beginning to think that the worst of the stage has passed when the rider directly in front of me punctures, loses control and goes sliding along the loose surface on his side. It's on a sharp descent and the bunch is moving. Although it all happens in a split second, I'm unable to go either to the left or right of the fallen man and I jam on my brakes. With both wheels locked solid I pile into him at about thirty miles per hour. Normally I would have been flung over the handlebars, but my toe straps are sufficiently tight for me to do several cartwheels with the bike still attached to me. For a second everything seems upside down; then pain. I lie there feeling as if I'll never move again. From the front of the group I see v Read Less

Goodreads reviews for The Yellow Jersey

The Art of Simple Food: Notes, Lessons, and Recipes from a D...

What Makes the Great Great: Strategies for Extraordinary Ach...