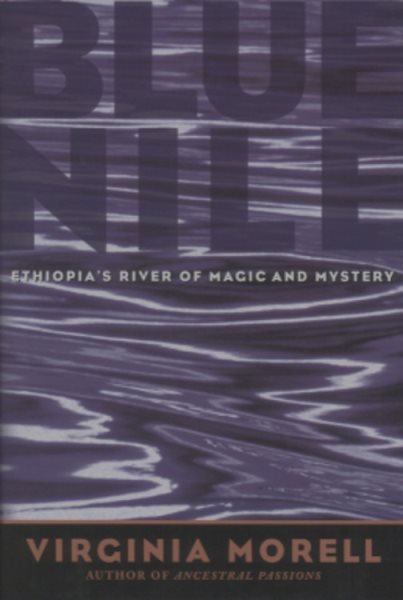 Offers an account of the author's experiences on a National Geographic expedition on the Blue Nile River through Ethiopia. Read More
Sacred, mysterious, powerful, the Blue Nile has carved a deep channel through human history. From its source in the wild Ethiopian highlands, this river passes through some of the most untamed country on Earth as it rushes toward its desert rendezvous with the White Nile in Sudan. More than one adventurer has perished in the Blue Nile Corge, whose hazards range from raging rapids to menacing crocodiles to armed bandits. When National Geographic invited Virginia Morell to join its 1999 expedition -- which hoped to be the first to descend the river in a single, uninterrupted trip from its source to the Sudan border -- she jumped at the chance to revisit Ethiopia, a land she'd come to love during a sojourn many years before. The only African country never colonized by Europeans, its history spans more than two millennia from King Menelik, said in legend to be the son of Solomon and the Queen of Sheba, to Ras Tafari, better known to the West as Haile Selassie, who ruled until his overthrow in 1974. This is an insular culture, isolated by geography and tradition, where ferenjjoch visitors are greeted with curiosity and courtesy -- and sometimes suspicion, after three decades of military rule and a long war with Eritrea. Highlighted by Nevada Wier's evocative photographs, Morell's engrossing account introduces a world where tribesmen still hunt leopards with spears, and where villagers sometimes journey for days to catch a glimpse of foreigners and their marvelous boats. We linger at an impromptu concert and feast with people who have never seen a white face before, meet patriarchs whose Christianity stretches back to the Roman Empire, and face off with Kalashnikov-toting militiamen who may not be able to read the documents they demand. By the time we reach the border town of Bumbadi, we've been taken on an unforgettable journey through time -- and among a strong people who've resisted the advances of the modern world. Read Less

Wildlife Wars: My Fight to Save Africa's Natural Treasures