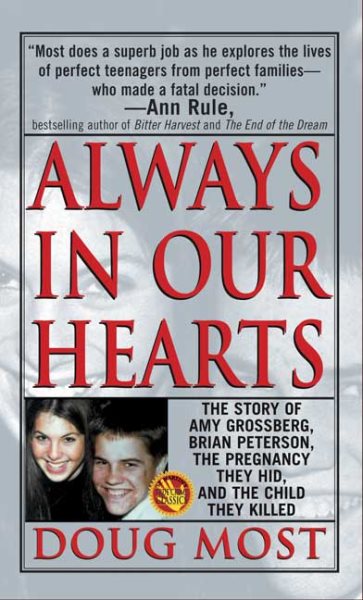 The heartbreaking true story of Amy Grossberg, Brian Peterson, and the baby they killed retraces the couple's steps as they concealed Amy's pregnancy for nine months and then delivered the infant in a Delaware hotel room, only to dispose of it in a garbage can. Reissue. Read More
Amy Grossberg and Brian Peterson grew up in a wealthy New Jersey suburb, meeting and falling in love while still in high school, then set out for college with their classmates. But in November of their Freshman Year, the two young lovers spent a night in a Delaware motel room where, after hiding her pregnancy from her family and her friends for nine months, Amy gave birth to a baby boy. Only she and Brian knew the child even existed . . . until the next morning when the newborn's corpse turned up in the motel dumpster. The case caused a countrywide outrage, and the teenagers ended up in court, desperately fighting for their lives and ultimately against each other... Read Less

Goodreads reviews for Always In Our Hearts: The Story Of Amy Grossberg, Brian Peterson, The Pregnancy They Hid And The Baby They Killed

The Race Underground: Boston, New York, and the Incredible R...

God and Me! Devotions for Girls Ages 6-9