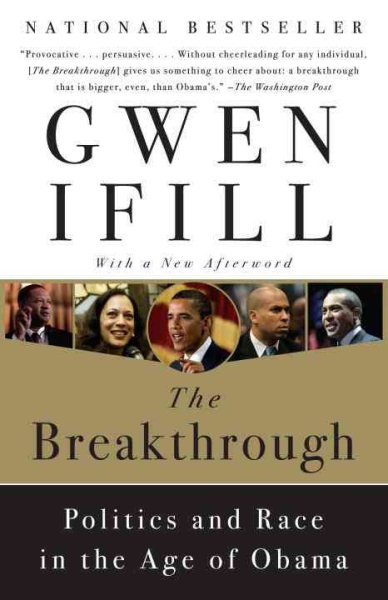 Assesses the impact of Barack Obama's history-making presidential campaign, especially on the political power of African Americans, and profiles rising African-American politicians. Read More
In The Breakthrough, veteran journalist Gwen Ifill surveys the American political landscape, shedding new light on the impact of Barack Obama&apos;s stunning presidential victory and introducing the emerging young African American politicians forging a bold new path to political power. Ifill argues that the Black political structure formed during the Civil Rights movement is giving way to a generation of men and women who are the direct beneficiaries of the struggles of the 1960s. She offers incisive, detailed profiles of such prominent leaders as Newark Mayor Cory Booker, Massachusetts Governor Deval Patrick, and U.S. Congressman Artur Davis of Alabama (all interviewed for this book), and also covers numerous up-and-coming figures from across the nation. Drawing on exclusive interviews with power brokers such as President Obama, former Secretary of State Colin Powell, Vernon Jordan, the Reverend Jesse Jackson, his son Congressman Jesse Jackson Jr., and many others, as well as her own razor-sharp observations and analysis of such issues as generational conflict, the race/ gender clash, and the "black enough" conundrum, Ifill shows why this is a pivotal moment in American history. The Breakthrough is a remarkable look at contemporary politics and an essential foundation for understanding the future of American democracy in the age of Obama. Read Less

Goodreads reviews for The Breakthrough: Politics and Race in the Age of Obama

The Breakthrough: Politics and Race in the Age of Obama

To Have or to Be