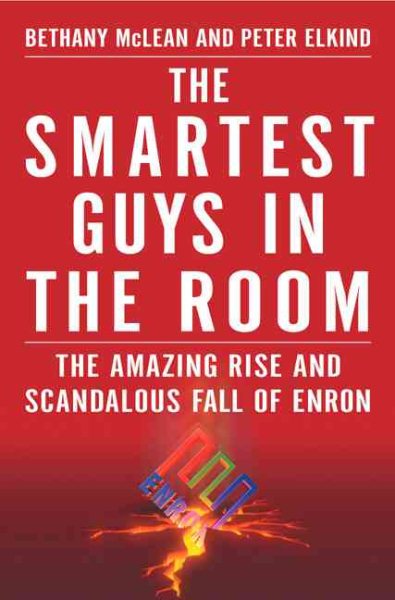 An account of the rise and fall of Enron draws on a wide range of sources while revealing the contributions of lesser-known participants in the scandal. Read More
The definitive volume on Enron's amazing rise and scandalous fall, from an award-winning team of Fortune investigative reporters. There were dozens of books about Watergate, but only All the President's Men gave readers the full story, with all the drama and nuance and exclusive reporting. And thirty years later, if you're going to read only one book on Watergate, that's still the one. Today, Enron is the biggest business story of our time, and Fortune senior writers Bethany McLean and Peter Elkind are the new Woodward and Bernstein. Remarkably, it was just two years ago that Enron was thought to epitomize a great New Economy company, with its skyrocketing profits and share price. But that was before Fortune published an article by McLean that asked a seemingly innocent question: How exactly does Enron make money? From that point on, Enron's house of cards began to crumble. Now, McLean and Elkind have investigated much deeper, to offer the definitive book about the Enron scandal and the fascinating people behind it. Meticulously researched and character driven, Smartest Guys in the Room takes the reader deep into Enron's past-and behind the closed doors of private meetings. Drawing on a wide range of unique sources, the book follows Enron's rise from obscurity to the top of the business world to its disastrous demise. It reveals as never before major characters such as Ken Lay, Jeff Skilling, and Andy Fastow, as well as lesser known players like Cliff Baxter and Rebecca Mark. Smartest Guys in the Room is a story of greed, arrogance, and deceit-a microcosm of all that is wrong with American business today. Above all, it's a fascinating human drama that will prove to be the authoritative account of the Enron scandal. Read Less

Goodreads reviews for Smartest Guys in the Room: The Amazing Rise and Scandalous Fall of Enron

Shaky Ground: The Strange Saga of the U.S. Mortgage Giants