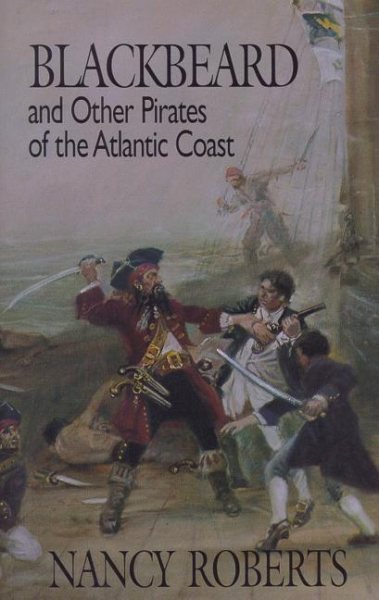 Eighteen swashbuckling sea robbers brought to life. Read More
They were bold, arrogant, brutal. They strode the rolling deck of a ship more easily than the tame streets of a town. They were wealthy—some beyond the wildest dreams of the governors and kings who first supported them, then pursued them. They were the pirates of the seventeenth and eighteenth centuries, and they terrorized shipping lanes and coastal villages around the world.The pirates in this book sailed far and wide, but all made their mark on the Atlantic coast. Some made their home there, such as the notorious Blackbeard, who anchored his ship off Ocracoke Island and lived for a time in Bath, North Carolina. Others put ashore just long enough to change seafaring history, such as the rakish "Calico Jack" Rackham, whose chance meeting in Providence, Rhode Island, with a spirited redheaded girl would give the world another legendary pirate—the beautiful Anne Bonny. Though popular culture has created an image of a "typical" pirate, plying his trade with dash and vigor beneath his skull-and-crossbones flag, in reality these men—and women—were of character and background as varied as the flags they flew.In this collection of pirate tales, you will meet scions of colonial aristocrats like Rhode Island's Thomas Tew and the dandified Stede Bonnet of Barbados; off-spring of unassuming farm families like Pennsylvanian Rachel Wall and Massachusetts' Charles Gibbs; and those like Edward Low of England, who escaped lives of desperate poverty and squalor by putting to sea. What these men and women had in common was a yearning for excitement, a love for the seafaring life, and a taste for the wealth that piracy could provide. Romance, danger, suspense, adventure—all this and more awaits you on board the tall ships with the pirates of the Atlantic coast. Join them now for a voyage you will never forget.Nancy Roberts, a popular Southern writer and storyteller, was the acclaimed, award-winning author of more than twenty-five books where she blended suspense, mystery, and history with a talent for finding true stories of the supernatural. She was aptly proclaimed the "Custodian of the Twilight Zone" by Southern Living magazine, and was frequently introduced as the "First Lady of Folklore." She was a featured speaker or teller at several locations: the North Carolina Museum of History; Thalian Hall in Wilmington, North Carolina; Kiawah Island Resort, South Carolina; University of Illinois at De Kalb; and many schools and libraries throughout the Southeast. She passed away in the fall of 2008. Read Less

Goodreads reviews for Blackbeard and Other Pirates of the Atlantic Coast

Ghosts of the Carolinas

South Carolina Ghosts: From the Coast to the Mountains