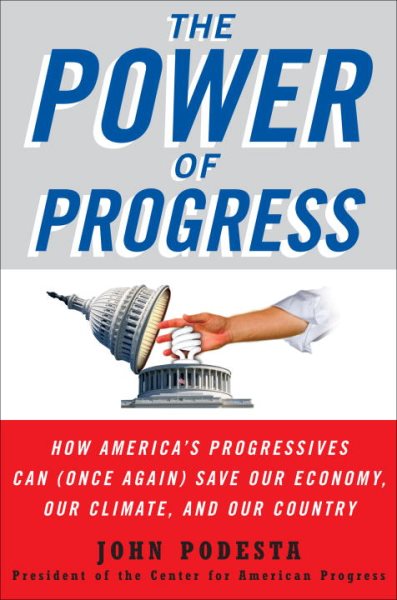 The former chief of staff for Bill Clinton identifies five of America's biggest challenges and offers an approach, based on progressive values, on how to deal with them, reshape America in the wake of the Bush presidency, and restore America's global leadership role. Read More
AMERICA IS FACING UNPRECEDENTED CHAL LENGES—new threats to our economic well-being, our environment, and our security. The American people are looking for real answers; the next president must mobilize our government and our citizens in ways that no president has done since FDR. America needs the power of progress . . . once again.At the turn of the twentieth century, the American Dream was beginning to dim in a nation riven by growing inequalities in wealth and run by a powerful network of privileged industrialists and their political allies. But that era also gave birth to a renaissance in American political thought that forever changed our nation.At a time when conservative ideology served as an excuse for the accumulation of wealth and privilege, the original Progressive movement created a new political order built on America’s basic principles—justice and equality for all, economic opportunity, and a commitment to the common good.The lives of all Americans have been profoundly improved by the achievements of progressive reformers, from the eight-hour workday and voting rights to our victory in the Cold War and the economic gains middle-class Americans enjoyed under our most recent progressive president, Bill Clinton. Today’s challenges demand a second great Progressive era. America needs an economy in which workers at every income level share in our riches; a climate policy that stops global warming and ends our addiction to fossil fuels; and American leadership in the global fight against terrorism, nuclear proliferation, and poverty.In The Power of Progress, John Podesta—former Clinton chief of staff—along with his colleague, John Halpin, explains how progressive values changed America in the wake of the Gilded Age and how these values will reshape America after the Bush presidency. Tapping the spirit of great progressive leaders from Theodore and Franklin Roosevelt to Martin Luther King Jr., The Power of Progress provides the road map toward a government responsive to the needs of its citizens; one that is focused on our generation’s greatest challenges: combating global warming, growing our economy and expanding the middle class, and meeting America’s twenty-first-century security challenges. Read Less

Goodreads reviews for The Power of Progress: How America's Progressives Can (Once Again) Save Our Economy, Our Climate, and Our Country