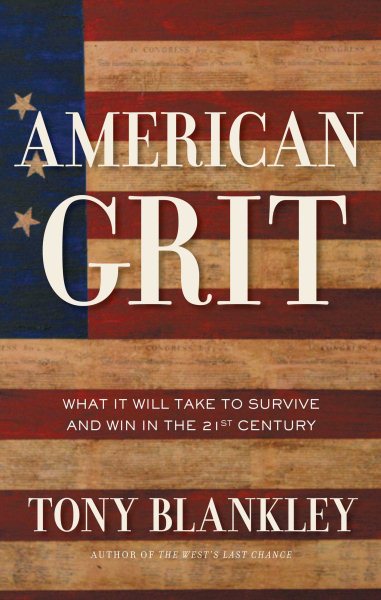 Argues that the liberal policies of President Obama will result in a decline of the economy, a lessening of the resolve to fight Islamic terrorism, and a government unable to counteract the aggressive policies of Russia, Iran, and Venezuela. Read More
Tough Times Call for Tough ActionIn American Grit, nationally syndicated columnist Tony Blankley warns that the administration of Barack Obama is a potential disaster at a dangerous time for America. Challenging Americans to recapture the spirit of sacrifice that has historically characterized our nation, Blankley demonstrates how Obama's agenda, with its emphasis on environmental sensitivity, military retreat, and the diminution of executive branch powers, promotes national weakness as a righteous ideal. In contrast, Blankley puts forward his own nationalist program based on toughness, resoluteness, and grit--traditional American values totally absent from Obama's agenda. In this passionate, hard-hitting book, Blankley shows:* How Obama's plan for national service is a weak substitute for what America really needs--a full-on military draft* How Obama's infatuation with alternative energy will damage America's national interests* Why we need stricter laws to prevent the media from compromising our national security* Why the office of the presidency, contrary to popular belief, has not gained enough power since the September 11 attacks* How we can craft a successful foreign policy that avoids the mistakes of both the liberals and the neo-cons* How our war effort in Iraq was undermined by effective enemy propaganda--and what we can do about it* Why education reform under President Obama will fail to address one of the biggest problems in our education system: the failure to teach patriotism Filled with solutions to problems ranging from the detention of enemy combatants to dealing with aggressive petro-states like Russia, Venezuela, and Iran, American Grit demonstrates how this country can emerge from its current domestic and military challenges as a stronger, more unified, and more tenacious nation--and why under President Obama, it won't. Read Less

Goodreads reviews for American Grit: What It Will Take to Survive and Win in the 21st Century

The West's Last Chance: Will We Win the Clash of Civilizatio...

The West's Last Chance: Will We Win the Clash of Civilizatio...

Honored and Betrayed: Irangate, Covert Affairs, and the Secr...