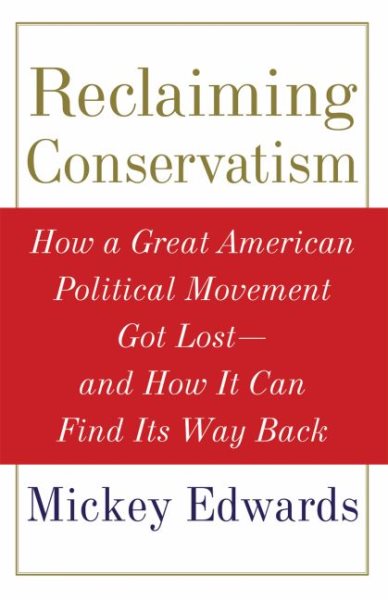 Argues that conservatives today have become champions of that which they most feared, and offers an effective solution for reclaiming the essence of conservatism in America. Read More
A leading figure in the American conservative movement for over 40 years, Mickey Edwards was a prominent Republican congressman, a former national chairman of the American Conservative Union, and a founding trustee of the Heritage Foundation. When he speaks, conservatives listen. Now, in this highly provocative and frank volume, Edwards argues loud and clear that conservatives today have abandoned their principles and have become champions of that which they once most feared. The conservative movement--which once nominated Barry Goldwater for President, and later elected Ronald Reagan--was based on a distinctly American kind of conservatism which drew its inspiration directly from the United States Constitution--in particular, an overriding belief in individual liberty and limited government. But today, Edwards argues, the mantle of conservatism has been taken over by people whose beliefs and policies threaten the entire constitutional system of government. By abetting an imperial presidency, he contends, so-called "conservatives" have gutted the system of checks and balances, abandoned due process, and trampled upon our cherished civil liberties. Today's conservatives endorse unprecedented assertions of government power--from the creation of secret prisons to illegal wiretapping. Once, they fought to protect citizens from government intrusion; today, they seem to recognize few limits on what government can do. The movement that was once the Constitution's--and freedom's--strongest defender is now at risk of becoming its most dangerous enemy. Edwards ends with a blueprint for reclaiming the essence of conservatism in America. Touching upon many current issues, this passionately argued book concludes that many of today's conservatives seem to have it all backwards. They have turned conservatism upside down--and this book calls them on it. Read Less

Goodreads reviews for Reclaiming Conservatism: How a Great American Political Movement Got Lost--And How It Can Find Its Way Back

The Parties Versus the People: How to Turn Republicans and D...

Honored and Betrayed: Irangate, Covert Affairs, and the Secr...