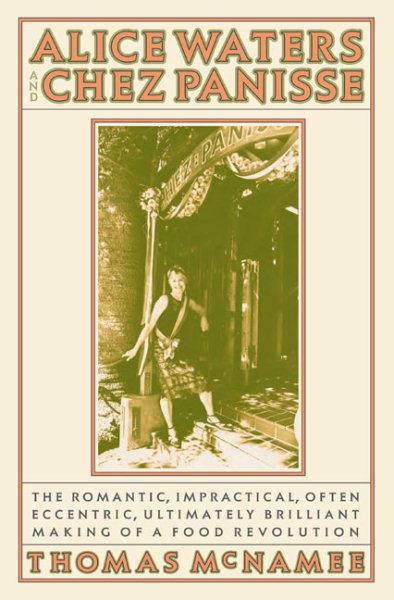 An authorized portrait of the owner of the groundbreaking California organic food restaurant that helped launch modern ideas about organic food, sustainable farming, and American cuisine offers insight into her complex character and her achievements as a chef and activist. Read More
In an authorized biography-the story of Alice Waters, Chez Panisse, and the San Francisco 1970s counterculture food revolution that invented "American cuisine" Not so long ago it was nearly impossible to find a cappuccino or a croissant in this country, and goat cheese and mesclun lettuce were virtually unheard of. Most people had no idea what "organic" food was, and even fewer thought about "sustainable farming." But in 1971, in a corner of Berkeley, California, a young Francophile named Alice Waters opened a small counterculture restaurant for her friends called Chez Panisse and launched an entirely new way of thinking about and serving food in America. Without an ounce of business sense or financial discipline, Alice relied on the coterie of devoted friends and followers who developed around her and on her strong principles of, among other things, using only locally grown and organic ingredients at the peak of their seasons, to keep her restaurant afloat. It was a reckless, extravagant, inexperienced venture that would have failed at any other time and place, but that instead-somehow-turned into a food revolution. Today, Alice Waters may be the most important figure in the culinary history of North America. Chez Panisse revolutionized what it means to eat out and gave birth to a new nationwide cuisine-the first in this country not associated with a single region or ethnic group, the first "American" cuisine. Gourmet's 2002 appraisal ranked Chez Panisse as the best restaurant in America, and The New York Times has called Alice "the mother of American cooking." Alice has become a public figure, revered and idolized by many. The first "foodie," she has become a famous chef, activist, advocate, and spokeswoman whose personal beliefs have become the values of an entire food movement. But her complex personal character is hardly known at all. Thomas McNamee was selected by Alice to document her story and was given exclusive access to her and her closest friends, to the Chez Panisse archives, and to private collections and memorabilia. As the story unfolds over the decades, we learn of her many passionate loves, her marriage, her divorce, the birth of her daughter Fanny, her failures, her critics. We come to know the extraordinary cast of characters who have formed the ever-shifting Chez Panisse community-a make-shift family with complex relationships, competing interests, and a strange, almost cultish, devotion to each other and to their work. Read Less

The Return of the Wolf to Yellowstone

The Man Who Changed the Way We Eat: Craig Claiborne and the...