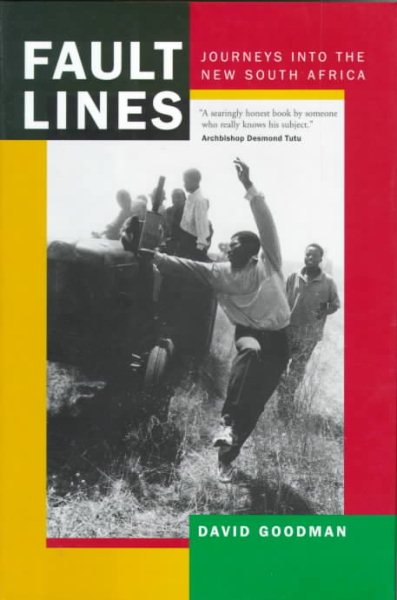 "This is a searingly honest book by someone who really knows his subject. Goodman is sympathetic to the attempts at transformation in my beloved motherland. The message of this book applies just as easily to the United States, where the fault lines run very deep, too. And the U.S. has been trying to solve these problems a great deal longer than the new South Africa."--Archbishop Desmond Tutu"David Goodman's vivid, intensely personal, and unobtrusively erudite book is irresistible reading for anyone who cares about South Africa."--Adam Hochshild, author of King Leopold's Ghost"A sequence of truths shown through the lives of eight contrasted citizens, this book reveals our new South Africa with the startling accuracy of flashes of lightning on a stormy night--and with the apartheid storm over, a remarkable rainbow of hope can be seen."--Donald Woods, author of Biko Read More
South Africa has experienced one of the world's most dramatic political transformations. David Goodman, a journalist and activist who has witnessed South Africa's struggles since the darkest days of apartheid, chronicles the historic transition from apartheid to democracy. This compelling story is told through the lives of four pairs of South Africans who have experienced apartheid from opposite sides of the racial and political divide. Taken together, these profiles provide the first in-depth look at the social dynamics of post-apartheid South Africa.Part social history and part personal drama, Fault Lines is an account of what happens to real people when their country is reinvented around them. The struggle to reconcile past evils is captured in the stories of a former police assassin and his intended victim. The rise and fall of South African racism is portrayed through the lives of the late Prime Minister H.F. Verwoerd&#151;the notorious "architect of apartheid"&#151;and his grandson, now a member of the ruling African National Congress. The battle to break out of poverty is detailed in the story of two black women: one an impoverished domestic worker and new city councilor, the other a Mercedes-driving member of South Africa's new black elite. The struggle for the land is told through the eyes of two neighbors: a black farmer who was evicted from his lands in the 1980s and has returned to start over, and a conservative white farmer who participated in the eviction and now does business with the man whose life he nearly destroyed. These powerful stories are accompanied by the photography of award-winning South African documentary photographer Paul Weinberg. Read Less

The ape and the sushi master : cultural reflections by a pri...