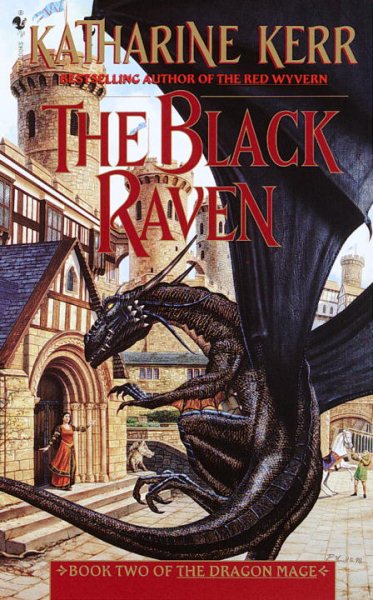 Sorceress Raena's scheme to kill her ancient enemy, Rhodry Maelwaedd, unwittingly unleashes Rohodry's guardian dragon upon the land. Read More
For the devoted followers of the dazzling Deverry and Westlands cycle, Katharine Kerr continues the magical epic saga she began in The Red Wyvern.The Black RavenHer latest tale shifts effortlessly between the shattered lands of the Rhiddaer and Dun Deverry itself. At the historic end of the Civil Wars, Lilli, newly apprenticed to the dweomer, fights with her untried powers to save her beloved Prince Maryn from evil.  Centuries later, in the city of Cerr Cawnen, the old evil awakens yet again when the sorceress Raena schemes to destroy Rhodry Maelwaedd, her bitter enemy during life after life. But her malice will draw the intervention of astral powers--and unleash the ravaging rage of Rhodry's guardian dragon. Only another untried dweomer can buy safety for the city and the berserker himself--and only at a most fearsome price.... Read Less