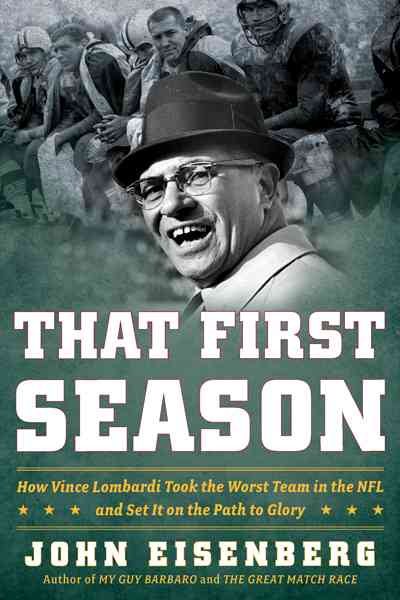 The untold story of Vince Lombardi's first season as coach of the 1959 Green Bay Packers. Read More
In the late 1950s the once vaunted Green Bay Packers were a laughingstock. They hadn't fielded a winning team in more than a decade and were nearly in jeopardy of losing their franchise to another city. The ultimate low came in 1958 when, with seven future Hall of Famers on the team, they went a lousy 1-10-1 under a too soft coach, Scooter McLean. They were desperately in need of a savior, and he arrived in a wood-paneled station wagon in the dead of winter from New York City.That First Season chronicles Vince Lombardi's remarkable first year as head coach of the franchise he would reinvent and etch forever in football history. In a single year, as the grizzled coach who took no bull, Lombardi would transform a team of underachievers into winners and reignite a city known for its passion for football. Based on exhaustive new research and interviews, That First Season is the seldom-studied prequel to a football career marked by greatness. John Eisenberg clears away the mist that surrounds the Lombardi legend to bring readers the real story of how the seeds of a football dynasty were sown. He also brings alive an incredible ensemble tale of a town, a team, and one determined leader. Read Less

Goodreads reviews for That First Season: How Vince Lombardi Took the Worst Team in the NFL and Set It on the Path to Glory

My Guy Barbaro: A Jockey's Journey Through Love, Triumph, an...

Cotton Bowl Days : Growing up with Dallas and the Cowboys in...

Native Dancer: The Grey Ghost Hero of a Golden Age