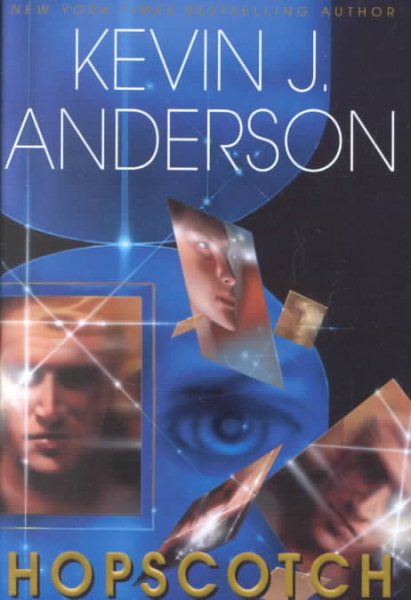 In a far future world where humankind has evolved the ability for two individuals to exchange bodies, the rich elderly and infirm pay the young for use of their healthy bodies, in a work of speculative fiction that explores the essential nature of identity. Read More
Suppose you could switch bodies with another person? What exciting new experiences would you choose to explore? What forbidden desires would you indulge? Suppose someone stole your life–how far would you go to get it back?From New York Times bestselling author Kevin J. Anderson comes a pure adrenaline thriller of hijacked identities, elusive motives, and deeply buried secrets–a disturbing, thought-provoking excursion into a sleek, hedonistic society where nothing is your own...not even your soul. HopscotchFor a fee, Eduard Swan will swap bodies with people in distress–those facing surgeries, emotional crises, moments of unpleasantness or discomfort they can’t or would rather not deal with. Eduard will experience the suffering for them. It’s a lucrative business, and in a world in which no one is required to feel any pain, there is no end of clients. But someone doesn’t want to play by the rules. Someone doesn’t want to return his body. And, unfortunately for Eduard, that someone is one of the world’s most powerful men. Now Eduard has no choice but to steal back his life. He has the perfect alibi–or so he thinks. For even in a world where you can hopscotch from body to body, you always leave a trail. And following that trail is a relentless dispenser of “justice” named Daragon, a childhood friend, now a zealous and ambitious agent of state security, who won’t let old friendships stand in the way of doing his duty. When Eduard goes on the run, hounded at every turn by Daragon, his only hope is two other childhood friends: Garth, a tormented artist who gains success beyond his wildest dreams, only to discover the terrible price of fame; and Teresa, a spiritual seeker who risks losing her own body to a fanatical religious cult as she embarks on a harrowing quest to find her true identity. Moving from underground hopscotch pleasure bars to the highest enclaves of power to a seamy underworld of illegal Phantoms, ancient minds who steal younger bodies in a quest for eternal life, Eduard and his friends seek the meaning of identity in a society in which appearances mean everything–and nothing–and where everything is relative...even murder. Read Less