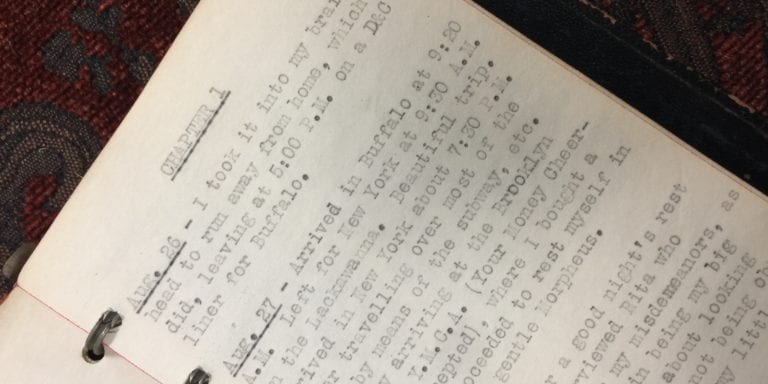 Sometimes one humble looking book becomes the “only book” in this ocean of four million books surrounding me at the Wonder Book warehouse. There are always great, good and intriguing volumes here amongst the common or forgotten or obsolete; the hurt, broken or incomplete. But they all lose their focus and become backgrounds as the “one” takes the stage, demands, and is given all attention. The beautiful tooled leather, the gilded publishers cloth bindings, the brilliant dust jacket graphics and even the colorful, frequently lurid, covers of the softcover books all fade to indistinctness.

We cast wide nets here to try be sure nothing potentially special, rare or unusual slips through our triaging processes without being looked at by someone with the experience to pull them aside for closer appraisal. We mostly use 3 foot long, 6 shelf metal rolling carts to move around loose books. Primary sorters are trained to put books and other items with certain specs on “Chuck” carts. These specs include very old books (although 99% of old books are just “old books”), slipcased books, books in Brodart dust jacket protectors, photo albums, scrapbooks, manuscript items, oddments etc, etc… There are about 15 Chuck carts out on the floor as I write this. By the time I put this writing aside and stand up there will likely be 16…

Going through these carts is often hard work. The drudgery of pulling off the common and valueless material is easy. It is the problematic material which gets my head screwy.

“This is so cool! What on earth can I do with it?”

When I approached this cart, I saw the little leather pocket book and thought it was surely an old man’s address book or annual date book. The kind my Dad would keep in the vest pocket of the tweed jackets he almost always wore under his white lab coat.

I picked it up and opened it expecting to find it blank (the usual case) or filled with names and phone numbers or at best, banal entries like: “Today it rained. Went to Elmer’s for lunch…”

I caught my breath when after the typewritten dedication page: “To the best parents in the world. Who tried to make a man of Sterling qualities out of very poor material…” I saw the “title” page:

“A Soldiers Diary by … of the Canadian Expeditionary Force in Siberia…submitted June 1919.”

And everything else in the building did indeed fade into the background. I took the little leather vest pocket notebook to my office and fell back onto the red overstuffed plush couch which I so seldom have the leisure to use.

I looked up the Siberian Expedition on my laptop before diving into the diary. I vaguely recalled that it had something to do with the Bolsheviks and the White Army. Wikipedia begins with this:

The Canadian Siberian Expeditionary Force (French: Corps expéditionnaire sibérien) (also referred to as the Canadian Expeditionary Force (Siberia) or simply C.S.E.F.) was a Canadian military force sent to Vladivostok, Russia, during the Russian Revolution to bolster the allied presence, oppose the Bolshevik revolution and attempt to keep Russia in the fighting against Germany. Composed of 4,192 soldiers and authorised in August 1918, the force returned to Canada between April and June 1919. The force was commanded by Major General James H. Elmsley. During this time, the C.S.E.F. saw little fighting, with fewer than 100 troops proceeding “up country” to Omsk, to serve as administrative staff for 1,500 British troops aiding the anti-Bolshevik White Russian government of Admiral Alexander Kolchak. Most Canadians remained in Vladivostok, undertaking routine drill and policing duties in the volatile port city.

Here’s the rest of the entry: https://en.wikipedia.org/wiki/Canadian_Siberian_Expeditionary_Force

The diary most certainly begins in the Summer of 1918.

D & C was the Detroit and Cleveland Navigation Company. It operated from 1868 to 1951. The steamship line mostly sailed between Detroit, Cleveland and Buffalo, New York. The fleet had some “Floating Palaces” on the Great Lakes and took many honeymooners to Niagara Falls. They typically left in the early evening and arrived the next morning.

Indeed, Endress’s next entry on August 27 has him arriving in Buffalo at 9:20 A.M. and departing for New York City on “the Lackawanna” railroad. He got into the City that evening and after touring it via “subway, etc.” he bought a bed at the Brooklyn YMCA (“Your Money Cheerfully Accepted.”)

He hadn’t gone too wild, however. On August 28 he sought out his big sister Rita “who bawled me out for my misdemeanor.” They then went about looking for a job for him but on August 31 he writes:

“Not finding work to my liking, coupled with smaller wages than I was used to and not being in love with the mee-tropo-lis, I decided to offer myself as a sacrifice on the altar of Mars.”

How he joined the Canadian Army on 42nd St in Manhattan I don’t know but he:

He was examined, accepted and told to report on September 3.

“Upon breaking the news to Rita, tears of pride filled her eyne…saying she was proud of her kid brother.”

(I thought “eyne” was a typo, but it is indeed and archaic plural of “eye.”)

On September 3 he boarded a train to Ottawa with other recruits.

On September 7: “Vaccinated. The ether nearly keeled me over.”

He also got inoculations of September 11, 18 and 25. “The arm that got the shots swelled in a couple days, the swelling extending down the arm about halfway to the wrist…about a week later I felt the effects and was pretty sick. Fell out of parade quite frequently.”

It was in that camp where he writes he came in contact with Players cigarettes (the most smoked brand in Canada) but he preferred Camels as did his fellows: “when ever I received a carton of “Humps” they didn’t last long.”

The next month is about camp life and on November 1 they left for Vancouver on board the “C.N.R.” (Canadian National Railway) arriving November 5 and then going on to Victoria.

On December 24 he bemoans his “first Christmas Eve away from home, snow and ice.”

January 3: “…Rflm Butler was killed by the breaking loose of a large box containing meat. He was horribly mashed up and died shortly afterwards. That afternoon he was given burial and last post was played as he was slid into the water.”

They passed through the Straits of Japan “the scenery was beautiful, the mountains being tinted with white, purple and buff. In my estimation the purple on Japanese mountains is the most beautiful shade of that color that there is.”

The next few months are filled with drills and duties and occasional excursions into the city where “of course some of the fellows got drunk on vodka or saki or something else just as bad. You could get all kinds of saki for a clasp knife or razor so such articles were hard to keep.”

There were several German officers—prisoners—in the camp who were trying to earn their passage home by “selling souvenirs.”

On May 1 “Was put on fatigue this morning. Everybody sore because it is B Coy’s duty week. This afternoon nearly everybody went over the hills instead of back to work.”

Apparently, there was a lot of AWOL in the Canadian camp and the Captain told them it was insubordination and that they should be court-martialed. The punishment wasn’t severe although he complains that after church he and several others were made to carry water again and again which he found onerous:

“Never again will I join any army or navy that is connected with the British Empire. Instead I feel inclined to join with the Sinn Feiners.”

On May 10 “Today I am eighteen years old…” That same day they got their demobilization papers.

May 17: “This morning Art Defoe and I took French leave and went to town.” i.e. AWOL. They went to “Chinatown” and “bot pipes and small combs…”

Throughout the diary Endress’s grammar and spelling are near perfect. An exception is use of “bot” and “thot” for bought and thought. Maybe that is a Canadian thing?

On the way back he met a Yank Corporal and treated him to supper. He “gave him every rouble I had as he could use them better than I.”

“From what I heard about the American Army in comparison with the Canadian Army has changed my mind considerably. We can get away with murder while they get hard labor for little things… We might get 7 days C.B. [confinement to barracks] while an American would get a couple years for the same offense.”

This morning got all packed up and left for Vlad…we were taken out to the Empress of Russia. Left port about 5:00 P.M.

Everything was all right. I’ve been sleeping in a hammock every night and sure like it. Some of the fellows are afraid to trust themselves to the canvas so they sleep on deck.

The diary is only about 50 pages long, but I was transported for a few hours by this 17-year-old boy’s big adventure halfway around the world.

Where did the book come from? No idea. Just one of thousands we go through each day here. I am very glad the net we cast to catch fish like this worked.

What will become of it? I’m going to pass it onto a colleague who specializes in manuscript and personal memorabilia like this. He is much more adept at research and placement of such things. I’m guessing it will end up in a university or institutional library with a specialty in World War One or the Russian Revolution or Canadian Military or… some place safe and permanent. We will split whatever money he can get for it.

Revenue is important. There are always wages and bills to pay. But the satisfaction of getting something unique and special to a safe and permanent place is far more substantive.

Maybe in his research he will be able to find out what happened to Endress. The only C W Endress I’m seeing online was a 19th century Canadian ship.

It could be Endress wasn’t even Canadian as he talks about Detroit quite a bit. He did fib about his birthplace as well as his age to the recruiters in Manhattan.

I hope he finds out more about him. I feel like I know C W now. I’m invested. 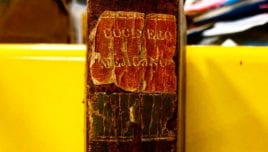 The dawn symphony begins slowly. Allegro ma non troppo. It is dark when the first voice sings out... END_OF_DOCUMENT_TOKEN_TO_BE_REPLACED