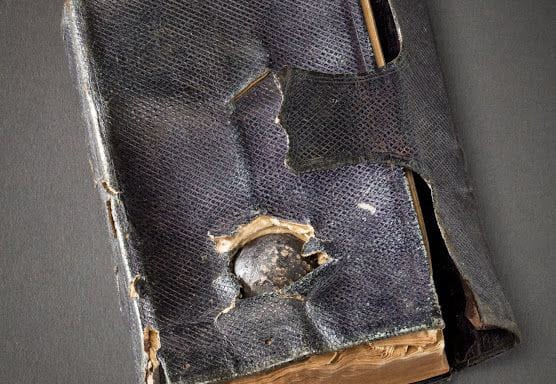 Sometimes we need a story more than food to stay alive

Can books save lives?

I guess it depends on what your definition of “save” is.

I found this list from a 2017 symposium on Why Books Save Lives held at the convention of the National Council of the Teachers of English:

I guess…but I think they are thinking more of “change” than “save.”

Books can certainly change a life. Maybe the right one at the right time can help someone who may be considering a terrible course of action.

Many people feel some books can save their “soul” or whatever you choose to call that—if you believe in souls at all.

I suppose if you found the diagnosis to a dread disease in a book and recognized your own undiagnosed problem, that could be a life saver.

Books have certainly changed my life. I had spent my life in books even before I opened the bookstore in 1980.

Of all the books that changed me, it is a certainty that The Lords of the Rings by John Ronald Reuel Tolkien has had the biggest impact.

I can recall vividly my brother Jimmie, older by ten years, tossing the beat up old Ballantine paperbacks onto my bed in the house I grew up in Amherst New York.

Jimmie (about whom I wrote a blog some time back) said cavalierly: “You might like these. They’re full of Elven spit and Dragon snot.”

Not long after, my parents and I moved to Fort Howard Maryland. My brother had already left for Marin County California and a career in Rock and Roll. Fort Howard is on a peninsula extending into the Chesapeake Bay. It was a Veterans Administration Hospital when we lived there. It had been constructed in the late 1800s as a real fort to protect the Port of Baltimore. There were still gun emplacements in the forest at tip of the peninsula. I had a great time crawling around them oblivious of the danger as so many young boys are. There was a replica “Vietnam Village” I discovered back in the woods. It was for training Special Forces/Green Berets stationed at the nearby Army Intelligence School at Fort Holabird. Kids weren’t supposed to know about it and certainly not go there. Of course, I found ways to sneak in. It was great fun to explore. I recall pulling the rope on the flagpole and a dummy grenade landed at my feet. The message crudely painted on it read: “You’re dead.”

Here’s the Wiki on the place. It has had an interesting history: https://en.wikipedia.org/wiki/Fort_Howard_(Maryland)

Except for the primitive “Vietnam Village” the rest of the peninsula was the domain of the VA Hospital or woods, beaches and sprawling lawns. My father had been transferred there to be Chief of Medicine. There was a guard and a gate and a tall iron spiked fence from shore to shore across the peninsula that kept those grounds separate from the tough neighborhood outside. Most of people outside the gates worked at Bethlehem Steel or in businesses that supported the enormous black dragon—the sprawling Sparrows Point Steel Mill—that would glow orange at night across the water on the next peninsula over. There weren’t many kids living inside the gates in the few houses there for the top doctors and administrators. There were no kids my age. The place was just a hospital for ill Vets. We weren’t allowed to walk outside the gates and mix with the “townies.” We were also instructed not to touch the Chesapeake Bay water surrounding us because of the pollution from the steel mill and nearby city. 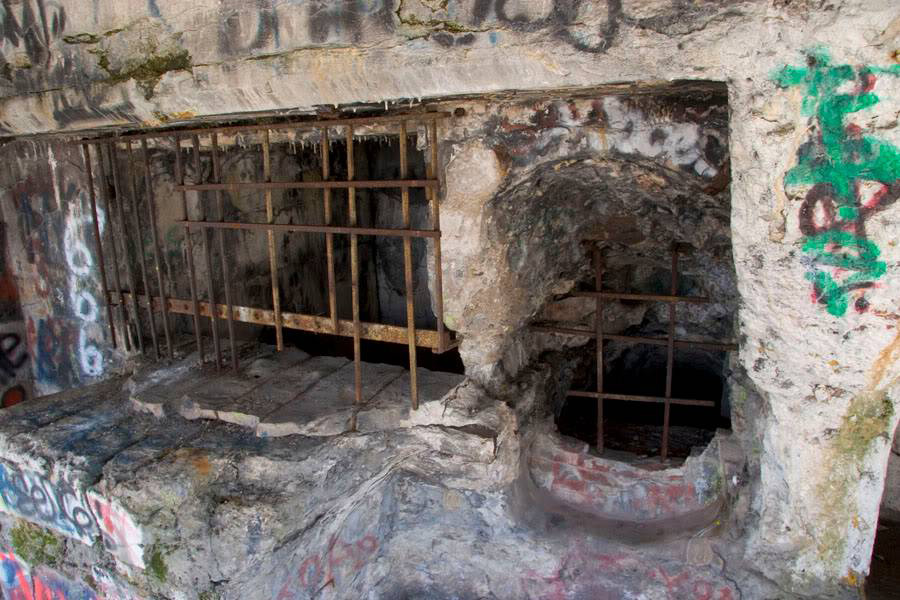 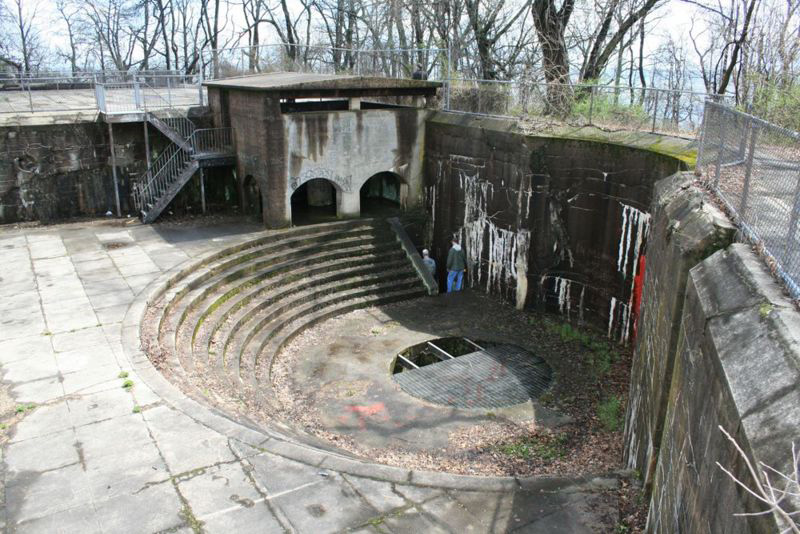 So, I had a lot time to myself. It was a kind of Secret Garden situation. It was a beautiful and in some ways magical place. But I often felt like a prisoner inside the fence and gate and surrounded by water on every other side.

At some point in my loneliness there, I picked up the battered mass market paperback of The Fellowship of the Rings. The next couple weeks were nonstop reading. One night I absconded with the emergency flashlight and wore out the batteries reading under the blankets. I couldn’t stop reading the Trilogy. I’d laugh. I’d weep. I’d worry. I’d rejoice. All for creatures that didn’t exist but lived in my mind in a world created by Tolkien.

Those books DID change my life. There are all kinds of theories about what the message of LOTR is. For me in the most distilled wording, it was about the struggle between good and evil. Beauty and nature versus horror and technology gone filthy mad. And it was about life and what comes after. Tolkien was a devout Roman Catholic, but in the world of Middle Earth which he created he eschewed any formal religion.

In one scene where Pippin and Gandalf are certain death is looming, Pippin states:

PIPPIN: I didn’t think it would end this way.

GANDALF: End? No, the journey doesn’t end here. Death is just another path, one that we all must take. The grey rain-curtain of this world rolls back, and all turns to silver glass, and then you see it.

PIPPIN: What? Gandalf? See what?

GANDALF: White shores, and beyond, a far green country under a swift sunrise.

PIPPIN: Well, that isn’t so bad.

For a lonely kid in a solitary environment, these books took me places; taught me things.

Maybe the environment itself enhanced that first reading. Fort Howard itself was green and idyllic. But it was surrounded by danger—by land and sea. And across the water a kind of industrial Mordor belched fire and smoke night and day.

I think when I got to the end—after reading all the appendices—I went back and read them all over. I still have those original VERY battered paperbacks somewhere. Those physical books and their story became a part of me.

Since then many more books have become a part of me. The printed “book” itself is a big part of my life and time. But nothing has ever filled the space occupied by Middle Earth and its denizens.

What got me on this reverie? 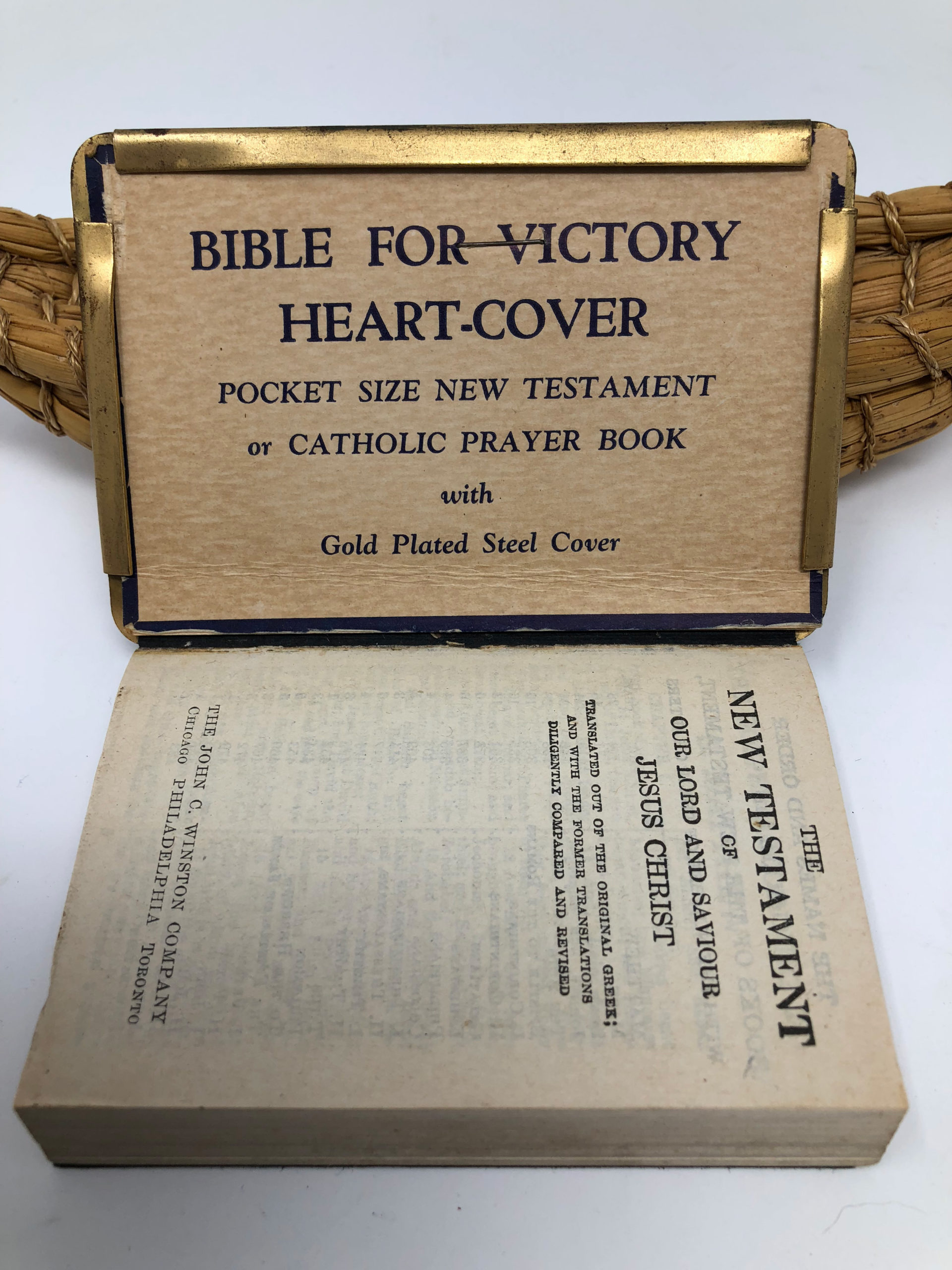 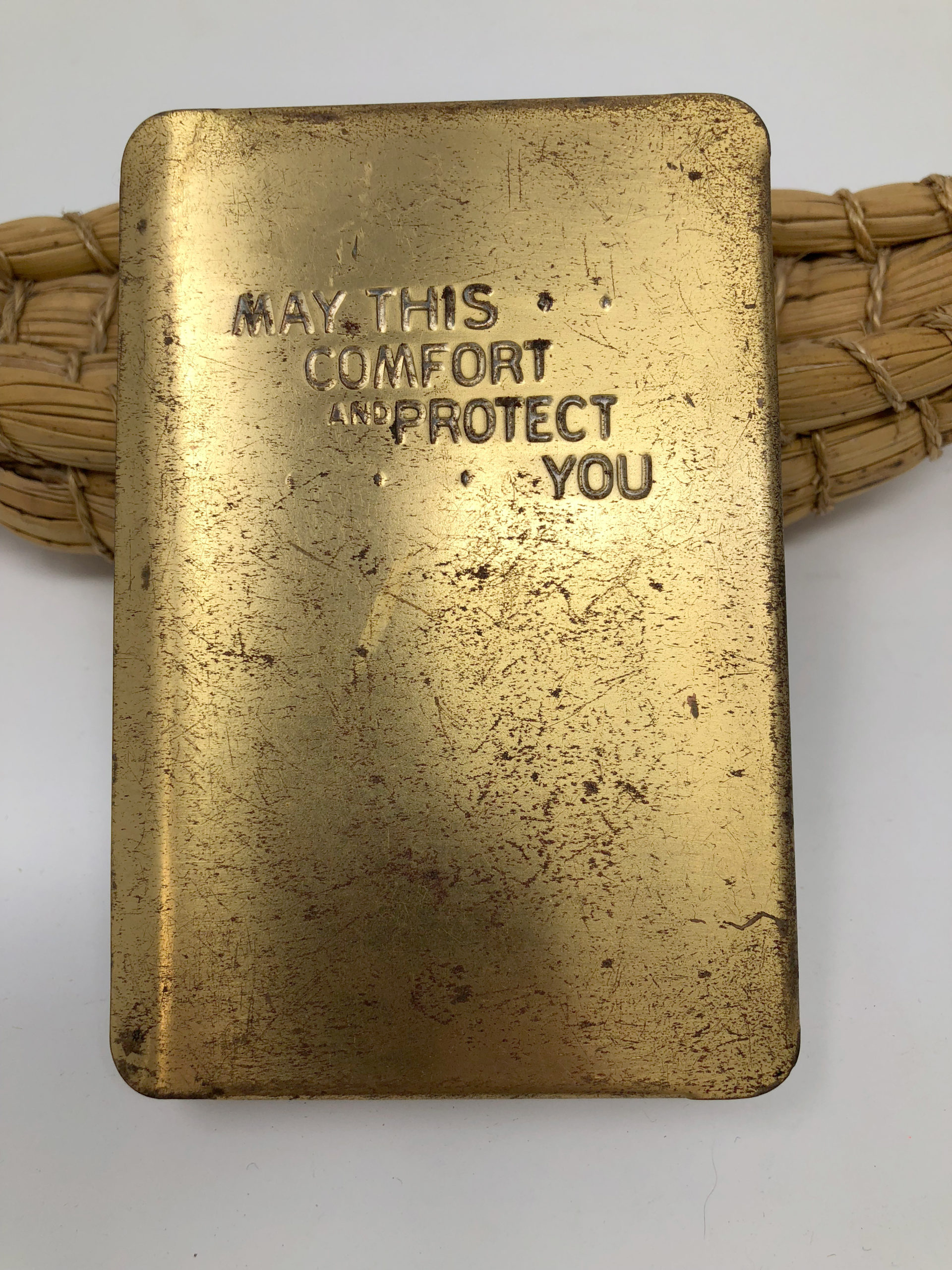 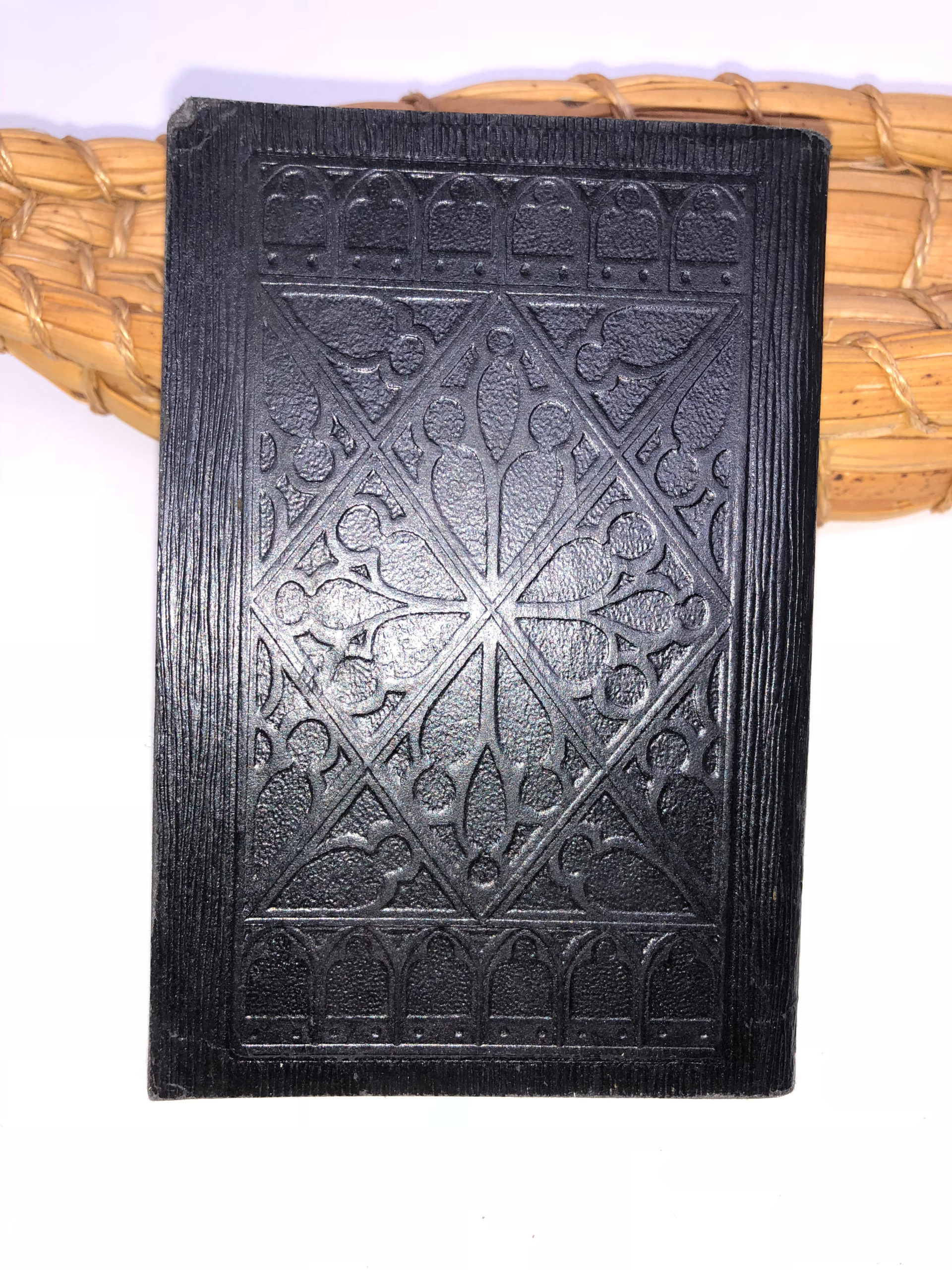 It is known as a Bulletproof Bible. I’ve seen a number of different varieties over the years. The earliest I’ve seen date from World War One. The latest from the Korean War.

There were anecdotes of books saving soldiers’ lives in the Civil War and almost certainly before. Keeping a small Bible in your chest pocket for inspiration and devotion was rewarded perhaps in a handful of circumstances by their thickness (and likely the slow relative velocity of muzzle loaded balls or bullets.) A bullet heading for the book carrier’s chest was intercepted by the book. A life was saved. 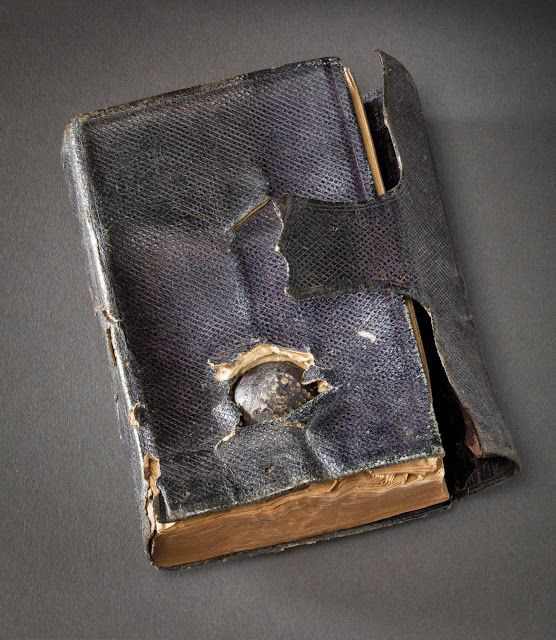 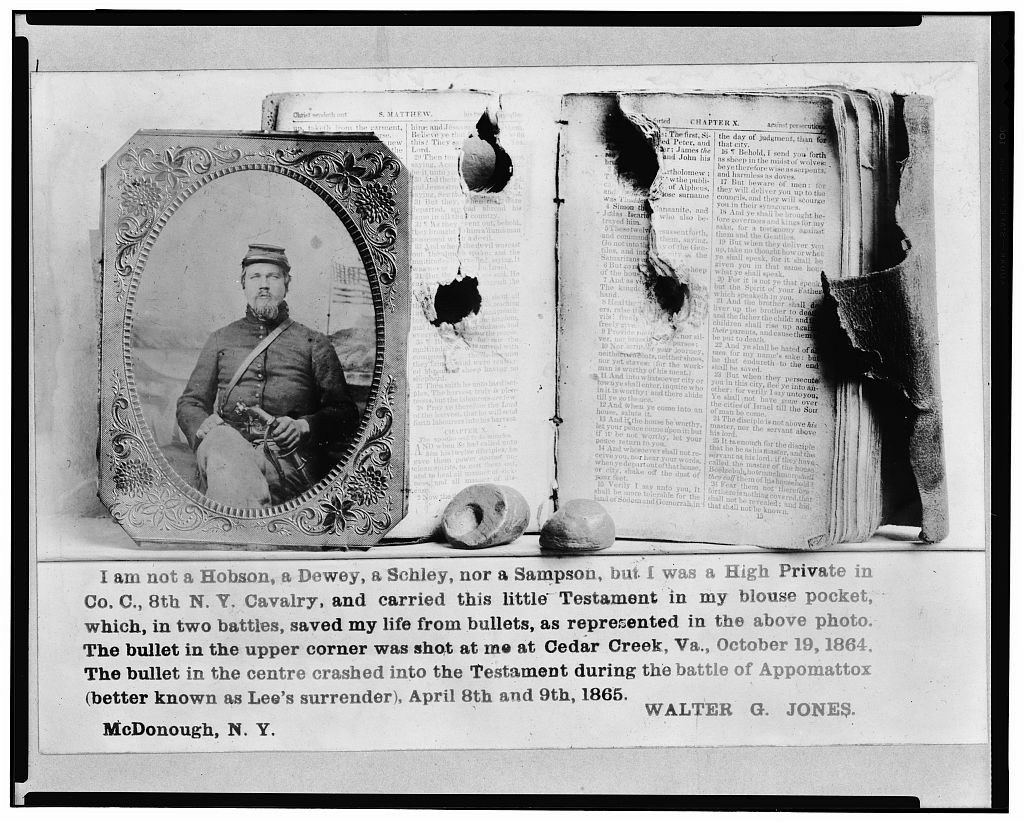 Some entrepreneur came up with the idea of armoring soldier’s Bibles or New Testaments with a small sheet of steel. Our particular one is gold plated. Why? You want nothing but the best for your soldiers.

Kurt Vonnegut mentions a bulletproof Bible in Slaughterhouse-Five. An American soldier captured by Germans has numerous confiscated from his person. Perhaps the bulletproof Bible could be considered a defensive weapon?

It seems far-fetched that a 3″ x 4″ thin piece of metal could offer any protection. But for a soldier’s parent or wife or… you might grasp at anything that might with the remotest possibility help your loved one who is all alone at war across an ocean.

And to those of devout Christian faith, the protection might seem doubled. Carrying an armored Bible in your chest pocket might save you—heart and soul.

Did it ever work? Over 60 million were killed in the Second World War. Did a Bullet Proof Bible save one in a million that carried them?

Who knows… and what is the downside? It’s the sentiment that counts here.

So, has a book ever really “saved” your life? Which ones have changed your life? Please comment and let me know.

In the beginning... We reviewed sales figures for the stores in April this week. BOOM! Go figure... END_OF_DOCUMENT_TOKEN_TO_BE_REPLACED