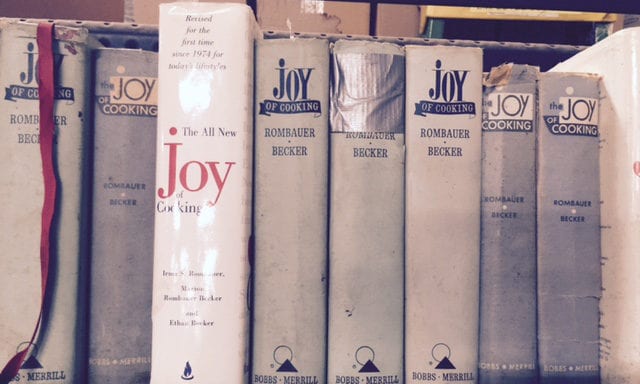 Not idly do the leaves of Lorien fall

Some books tell stories in ways other than their contents. At Wonder Book, we used to rarely get copies of The Joy of Cooking in any condition. It was just a book that people would not give up. Now we are seeing more and more older copies appear in our warehouse.

The Joy of Cooking has a sad beginning. Irma Rombauer published it originally in 1931. Her husband had killed himself in 1930. Irma’s children convinced her to record her recipes and cooking styles. Why? Maybe they thought it would distract her from her loss and the money problems and personal turmoil it caused.

She wrote in the forward, “It was written at the request of my children, who, on leaving home, asked for a record of ‘what mother used to cook.'”

Somehow she put it all together and published the first Joy privately! She paid for a printer to print and bind 3000 copies in 1931.

Since then, the book has sold millions of copies and has gone through eight editions. For many, many people, it has been the cornerstone in their cooking library. Often it would be a wedding gift, or the first cook book a couple would acquire when they started housekeeping together.

It is quite unusual to find an older copy that doesn’t show wear. Quite often a great deal of wear. Indeed this well-bound, tough hardcover regularly arrives here in tatters.

This book was “bound” to last. Durably put together with strong sinews and tough boards. A book used to pieces tells the story of a lifetime of frequent use. Oddly, with all the wear and splits and torn spines the interior hinges are rarely cracking.

Millions of novice and experienced cooks turned to it for thousands of meals during their domestic lives. Even professional chefs would often have this book in their homes as well as commercial kitchens.

I recall referring to our family’s copy any time something new was to be tried. What do you do with a big, old kohlrabi? (Well, not too old.) When you were a twentysomething in the 20th century and hadn’t ever seen one before—and there was no Internet to click into—you would pull your Joy off the shelf and look the thing up. Irma, and her daughter Marion, would explain all. By way of introduction, they would define exactly what the flora or fauna you were dealing with was. Then they would give you a number of easy to understand preparation options.

“Turkey: A young turkey has black feet…an old turkey has gray feet…Turkey cocks are better for cooking than turkey hens.”— The Joy of Cooking, Bobbs-Merrill, 1951

She would then give you cooking options: Roast, Roasted in Foil, Turkey Othello, Fricassee, Broiled… This is after five pages of what to do and why with all poultry. And after THAT eleven pages of chicken recipes—many of which could be adapted to turkey, I suppose. Coq au Vin, Maryland Chicken, South Carolina “Crunchy Fried,” Casserole, Smothered, Spanish, Paprika, Stewed, Curry, Fricassee (French and American styles)…

I’m hungry—and it’s only 5 AM. And, suddenly, I’m nostalgic. My mom was from Alabama. Orphaned as a toddler by the Great Flu Epidemic of 1918, she had a tough childhood—though she would rarely talk about it. Orphanages, foster parents, half-brothers… When she did, it was usually funny stories of goat carts tipping over or kids playing dress up…or learning to prepare food Southern style… But we all knew there were scars. She pulled herself up and became a nurse. She then married a brilliant, young physician researcher and soon started raising the first of four boys. The family moved around a lot due to World War II and other circumstances. Each boy was born in a different state. I was a surprise late in both their lives. And the only one born north of the Mason-Dixon Line—in Buffalo, NY. They’d both be gone by the time I was 22 after years of chronic illness.

But BOY, my mom could cook comfort food. Thanksgiving was always a major production. The dining room table would groan from the weight of all the dishes. Mashed potatoes and scratch gravy, sweet potato casserole, pumpkin and pecan pies, and a big, old, golden turkey with sausage dressing overflowing back and front.

My Dad, an accomplished photographer, would insist on many, many shots, “Lean in!”

“Everything is getting cold!” Mom would fret—her frilly, holiday apron tied about her ample waist.

I can easily conjure the image of me seated at the round, oak, claw-foot, kitchen table. I’d watched her back as she would fry chicken in the black cast iron skillet she called a “spider.” Or putting up preserves from the Queen Anne cherry tree or rhubarb patch or Concord grape arbor or… For all the trials of having a mother who would become essentially handicapped by the time I was 7 or 8, I was very lucky. She’d make me breakfast (bacon sandwiches were a favorite), set me outside in the yard with a wooden crate as my table for my own picnic lunch, and there was almost always a hot dinner made from scratch for dinner when Dad got home.

They both had some very exotic tastes as well. Dad was from Texas. They’d make things this “Northerner” would not touch as a child. Liver and onions, ham hocks, pig knuckles, green beans with pot likker, stewed spinach (cooked to death), rhubarb pie…

I opened the “icebox” (we called it that but it was actually a refrigerator) one evening looking for a snack to sneak only to come nose to nose with a grisly pig’s head. Weird creepy stuff Mom and Dad would sometimes eat.

This got me looking for her “cookbook.” Her youth preceded Joy’s popularity. Her choice—or what she was led to—was The Boston Cooking-School Cook Book by Fannie Merritt Farmer.

Inside are many handwritten recipes as well as clipped recipes tucked in throughout. There’s the legendary $100 Cake. It was from my Grandmother Boppa in San Marcos, Texas. Supposedly, she had gone on a trip to Manhattan to a fancy restaurant. She loved the dessert so much she asked the chef for the recipe for the chocolate cake. She was given it AND a bill for $100 (a hugely exorbitant amount at the time.) I thought that was true for many years until I heard others with the same family lore. (I believed in Santa Claus for quite a while as well.)

I am intentionally not showing the entire recipe. It is a rare family secret (maybe.) For $100 perhaps…nah, that’s what it cost Grandma over a hundred years ago. Adjusted for inflation, you’d have to offer much, much more.

So, I’ve somehow held onto Mom’s “joy” for nearly forty years after her passing…

Oh, how I’d love her $100 Cake again…the thick chocolate frosting had such neat crunch to it.

Ok. Ok…back to the present.

There have been many occasions over the years when we’ve been asked to find and return an old cookbook mistakenly included in the sale of a parent’s book collection to us. That is seller’s remorse on a broken heart scale, and we do our best to reunite the book and daughter or son.

Years ago when a battered Joy came to hand, it would often evoke sadness. I could hold it and feel decades of family meals and births and first days of school and graduation and marriages and grandkids. Too sentimental? Next time you find one in a used bookstore—pick it up, close your eyes and think of what that book has seen.

When a tattered worn and stained Joy came to hand, I knew it usually represented the end of someone’s story.

A mom or grandma or dad would not lightly let these paper leaves of family life fall from the family’s ownership.

I knew someone had died or left their home and kitchen forever.

Books can outlast many generations. And I know the physical book will be created for many, many years to come.

But we now get The Joy of Cooking so often. Still for years I would insist every copy go to the stores for resale if their condition was not good enough for online sale. About a year ago while touring one of my Wonders, I noticed we had a couple shelves full of Joy. And there was a 3-foot stack on the floor at the endcap.

Too much. Too sad. Too commercially unviable.

“Send all but five to the warehouse to my attention.”

I’ll think of something.

We put them on carts, and I looked at the sad lineup.

Any practical bookseller would do the prudent thing and send these to the “farm,” i.e. the pulp mill, to be recycled.

I hadn’t heard that inner voice for quite a while. My “Book Muse” had returned!

“Yep. I had Wonder Fatigue. Or more like Chuck Fatigue.”

“Awww, don’t get sappy and romantic on me!”

“What are ye looking at?”

“Squint a little. Then dream a little.”

Offering them by the foot was not first or second or fifth choice. It was the last and only choice.

A couple weeks later the manager of Books by the Foot, Jessica, asked me, “Do the stores have any more Joy of Cooking? We are sold out.”

Now we always have some Joy in each store and Joy online. But the old, sometimes battered copies—most of which are supernumerary and “worthless”—now go to Books by the Foot.

(Well, not ALL old copies are worthless.)

Looking online this morning I see three first editions. $1500—$10,000. Other old cookbooks can have substantial value as well:

But my mom’s Fannie Farmer is worth far than that to me.

I hope you can find and keep your parents’ or grandparents’ Joy. Look at it and think how many times it lay open on the kitchen counter next to the stove while something wonderful was baking or simmering.

If, like my home, your family’s go-to cookbook was not The Joy of Cooking, look around or, if you’re lucky, ask Mom or Grandma to show you which cookbook was the “one.” Make a mental note so that when the time comes—hopefully far into the future—you can make sure you won’t let that one go.

For it is priceless and irreplaceable. 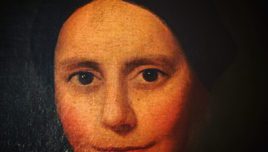 A year ago, after my last brother died, I wondered if I had a dozen good years left. He was twelve... END_OF_DOCUMENT_TOKEN_TO_BE_REPLACED