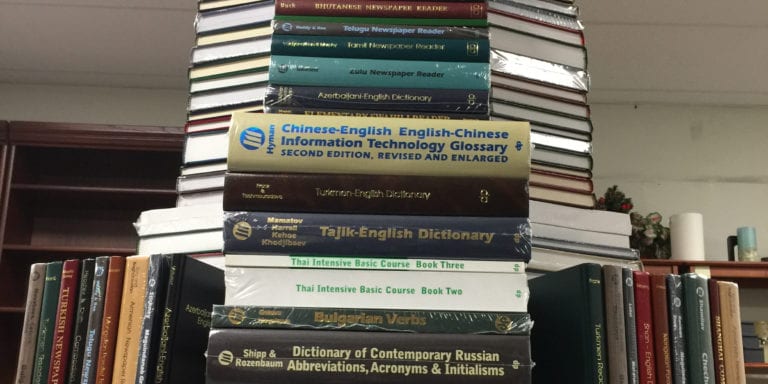 “Are you charging us to take these?”

That was an unusual question. One that I don’t recall ever hearing before. And it was October 2017.

Not that I haven’t been tempted to tell someone with dreadful books, “You’d have to pay me to take these away.”

But once we’ve made the trip, we’ve always tried to make the deal and get the books out of wherever they are, be it a basement, attic, barn, storage unit…

On a few occasions when the books were too dreadful—usually mold beyond rescue due to dampness damage—I’ve bailed, apologizing and saying, “We can’t help.”

Charging someone to remove their books. What a concept! Nah, I don’t think I’d ever get to that.

“No. We are just here to remove the books you’re not moving.”

I had gotten a call from a former neighbor—business neighbor—at our old warehouse location. They bought and sold office furniture mostly—using one company’s failure to make an affordable deal for another to start up with a markup in the middle. They’d also move offices from time to time.

“Hey, we are working at a government contractor’s office in Virginia. They want to get rid of a lot of books. A couple thousand I think. They’re all new too! I feel bad taking them to the dump. Do you want to pick them up?”

Soooo…he would have charged to haul them away…

“Bookectomy”—it is a term we’ve come up with for those occasions when we are asked to remove books, and there is none of our money involved. In these instances, the people at the other end just want the books gone and we oblige.

“Can you send me some pictures?”

A bunch of images were texted to me.

It was a small room, but it appeared there were a lot of books!

“Any idea how many,” I asked again. Scale helps me decide how many boxes, vehicles, and people to send.

I looked closely at the images and then zoomed in to see titles. “Azerbajani”? “Tamil”? “Turkmen”? Everything seemed to be exotic language textbooks and dictionaries. Sometimes exotic can mean rare and valuable. Sometimes exotic means the customers for some books are as scarce as the books.

“These could be great or they could be dreadful,” I pondered.

I had to go. I couldn’t see these “new” books being dumped or pulped. At worse, they were pretty. Decorative. If we could not find much of a worldwide online market for them, we could maybe sell them to interior designers.

Something gets set off inside me when I hear about books going to landfills.

“There’s got to be something there,” I thought and hoped.

We set a day. Oddly, I was told I needed to provide personal info and insurance proof to even get into the building.

“That’s a new one,” went the rumination.

I erred on the side of caution and had our big AND little box trucks prepped and loaded with empty boxes for packing. I chose three reliable warehouse guys and decided to put myself into the equation. Four of us and two vehicles. Probably overkill. But this way I can see what the situation is and get the guys going. If we get one vehicle loaded in a hurry, I can head back alone while the other three pack the rest and load the big truck.

If we even need the second truck.

We headed south and then east into the Virginia suburbs. I worked on my laptop on the way down while Eric drove. Multitasking. I’d look up every once in a while and pass on advice from the woman who lives in my phone about how many miles until the next turn. Eric and I got there first.

I texted my contact at the office saying, “We are here.”

I decided to get out and knock on doors to ask. All the offices were locked and I was hesitant to ask to be buzzed in. Shy. Eric continued driving around the office complex. Then he returned and waved me down.

“Hmm…never would have found that entrance.”

“Are we at the right place?”

Giles introduced himself and we followed him up and into the building.

The loading dock door behind the truck rumbled, rattled, and rose. Light poured into the little dock room.

We were led to the book room which was directly behind the dock. It was about 12’x35′ with 15′ ceilings. Three narrow aisles ran its length narrowed by bookcases and stacks of boxes. Short and tall piles of identical books rose on shelves, from the floor and sometimes atop the bookcases. Unopened boxes were stacked along the aisles and atop some bookcases. It was as if we were in small narrow book canyons.

“Getting these out will be an exercise.”

I asked Eric to begin bringing in boxes. I asked Giles if I could use the restroom. I was led down a hall with offices on either side. Eyes turned and looked up at me from each office we passed. It was as if strangers were not in often. They all wore ID tags on lanyards. We arrived at the men’s room. When I emerged, he was waiting for me. I guess strangers were not to be allowed to roam unaccompanied.

Back to the book room. Marie, my remote email and text contact, was there now.

Then began the unusual removal procedure that would dictate the day. Turns out, we weren’t there to take everything. The company was retaining some of the books. And they hadn’t decided which or how many.

Eric and I waited as they determined which boxes or stacks of loose books were to go.

“This stack can go but leave one box.” Marie indicated a seven-foot stack of boxes against a wall. They all contained the same book. Chechen Reader.

I pulled them away, stacked them in the aisle. I tilted the stack back so Eric could slip the tongue of the two-wheel, hand truck beneath it. I pushed the stack toward him; he tilted the truck back and rolled it down the aisle, through the door and toward the dock. The door wouldn’t open fully. There was a full bookcase behind it. Books everywhere—loose and boxed. Above, below, and around.

That’s how the day began. While we stood and watched, they would briefly discuss a title and decide if or how many copies they’d want to retain and then turn to us, “These can go. All but five.”

Eric and I would pounce on the boxes or drop to our knees and begin packing loose books.

Clif and Steve then arrived in the big 24′ truck. Suddenly, the little room was full of six of us, plus the empty boxes we’d hauled in to pack, plus the hand trucks.

I tried to speed Giles and Marie’s culling process along.

“How about these boxes?”

I hate paying people to stand round.

I noticed a sign attached to the wall, “Warning: Conversations in this Room are NOT Secure”

It all began to add up. Though there were dozens of languages represented in this room, there were no “common” languages. No Spanish dictionaries. No Japanese phrase books. No French, Portuguese, Swedish, Sanskrit…

I handle most of the foreign language books that come in to the warehouse. Not by choice. No one else here currently has the background. They usually aren’t much fun. I can usually recognize languages that don’t use the Roman alphabet. Even if I can’t read a word, I can, by extrapolation sometimes, determine a book’s viability for resale.

“That’s got to be Ayn Rand’s The Fountainhead—in Hebrew.”

Unfortunately most of the foreign language books that come in have no potential resale value. Old obsolete textbooks and former bestsellers that don’t resell in English certainly aren’t worth putting on the shelves at the stores or online. Diet, self help, inspirational…you get the idea. Foreign language books already have a strike against them in our suburban stores. Still I send out as many as I can—if there’s any hope that someone might want them.

So, I’m the language expert at Wonder Book and some of these languages were so exotic I’d never heard of them.

An epiphany…the light went on in my mind. “These books are for State department people, military intelligence or spooks,” I thought.

First one truck was filled and then the other.

“We can’t get any more in,” Clif told me. “Good thing there aren’t any weigh stations on the way back.”

I told Giles and Marie we’d gotten all we could for the day and that we could come back for the rest the next week.

We headed north and west through the booming Northern Virginia suburbs, up through Loudon County with its disappearing horse farms and newly appearing wineries, then across the Potomac and home to Frederick MD.

The Cube truck backed to the low Dock 2. The 24′ box truck bumped back against the high Dock 6.

I’d had the foresight to snag a sample copy of each title we’d taken.

“Make sure those boxes don’t get mixed in. Actually, go ahead and cart those samples and push them to the office.”

I asked Clif to keep all the pallets they unloaded together.

“We don’t want any these languages wandering off.”

We still don’t know if these “free” books were a good deal or not. Time will tell.

We’re researching the samples to see how they rank for online sales. Actually, do they rank at all? And we have hundreds of copies of some of the titles.

I asked Jessica to stack the samples in a pile to see what they look like.

“They look like a little Tower of Babel,” I mused. “Kinda cute!”

I asked Clif to put all the pallets together in one spot.

So many! 12 pallets stacked high. I had no idea we hauled away so much in those flurried hours.

“A mountain of Babel.”

What will we do with all these?

I dunno. Time will tell.

At least we kept them out of the landfill.

“You get lemons—make lemonade,” my mom used to say. 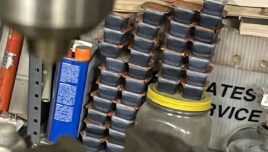 Saturday, Christmas Eve. 3 degrees! One of the first things I do upon waking is look at the indoor/outdoor... END_OF_DOCUMENT_TOKEN_TO_BE_REPLACED