This is the FIFTH anniversary of the Wonder Book Book Stories (or “Blog”).

The first was published on July 27, 2017. We have published a new one EVERY Friday since then, some times more than one!

If any of you have read them all you deserve an award.

If you have read any of them Thank you! It is a labor of love – love for books and the booklife everyone at Wonder Book has experienced – going back to the beginning in the summer of 1980!

This week there is a New Round and Round story “Part 37”, but I wanted to have a “book life” story as well.

Circumstances conspired to make that impossible so we are sending out an updated version of a story originally published in 2017.

This started with a phone message taped to my door some years ago. It read something like this:

“I’m handling my mother’s estate. She had hundreds of first editions and rare books. Are you interested?”

Do bears hang out in the woods???

I called and set up a time to visit.

There was wet snow on the ground around the petite, modern brick and faux stone mansion in a very high-end and exclusive development. The landscaping was perfect. The drive and walkways were brick. Only three very similar homes shared the cul-de-sac.

The son led me into the house and every room was filled with different stuff. Plates, glassware, ceramics, dolls, framed things, pens, prints… He had turned the house into an antique mall in order to liquidate his mom’s stuff. The displays were very well organized and thematic. He had clearly put a lot of effort and thought into maximizing the value of the estate.

I was led down to the basement where the books were. He had hundreds out on display in stacks around the perimeter of the family theater room. Many stacks stood upon boxes full of more and more books.

Each book had a 2-3 inch slip of white paper dangling from the top edge. I knew from a distance what that meant. He had researched every title.

I’d had some bad experiences with books researched by well-meaning folks with access to the web and no experience in selling (or buying) books. Painful, embarrassing experiences…

Many of you probably now know the online prices for identical books can be all over the place on the megasites offering millions of books for sale. That wasn’t always the case. In the early days if someone saw a book listed on a megasite for $300, then, in their mind, it was a $300 book. IF it was the only copy listed.

As millions and millions of books got added to the web, competition kept driving prices down as sellers kept trying to undercut other sellers, so their copies would be the lowest price available. When people who had no experience looked up books to determine value, they would sometimes gravitate to the higher end. They would often ignore the dozens, or even hundreds, of identical copies listed for far less—even for pennies. They would put a slip of paper in the book for, say, $125 because “I found a similar copy selling online for that price.”

Ummm…listing at $125 and ever selling for $125 are two vastly different things.

They would look at me like I was either incompetent or a cheat when I tried to explain that the book had very little value since there are many, many identical copies available for far less.

I quickly came up with a standard explanation to encourage them to revisit their research, “Go to www.abe.com. Find the EXACT match for the book in your hand; that is, the same edition and condition. Look at the 5 LOWEST, exact matches. That will give you a good idea of the current, retail selling price for your book.”

Sometimes I’d pull out my laptop and do a few with them.

If there was still doubt or discomfort after they’d given the Internet another look, I would suggest getting second opinions from other booksellers.

I refused to make any offer on the book or collection until I was sure the seller was aware of actual market value rather than pie-in-the-sky exorbitant prices.

If I sensed there was STILL doubt or discomfort and they still pressed me to “give them my best price,” I would punt and simply say, “I’m sorry, I can’t make an offer on these books.”

I studied book after book. Pile after pile. He had crazy high prices on everything, and most everything had condition problems or lacked dust jackets or were written by less than popular or forgotten authors. So many old books are not collected much anymore…they are just “old books.”

Yes, there were first editions.

Yes, there were some desirable books.

But the condition on so many of them…

Look at it this way…say you have a 1960s Mustang. If it is in great shape and everything is original, you have something wonderful. But if it is on blocks, out in a field, and is rusted through, that is a different story. It might be worth restoring, but it would likely cost a fortune. And then it would still be “restored.”

With books it is rarely worth repairing them. Bookbinding is a highly skilled and labor-intensive craft, and any repair would likely add a minimum of $100 to the cost of the book—often much, much more! A book should be highly desirable and valuable if you want to invest money in repairs.

But here were so many books with problems. How could I explain that most of the books were way overpriced – I mean overvalued? The overpriced books drowned out the small fraction that were actually valuable and somewhat realistic.

Then, like a heavenly ray from above, I spied the mom’s reference books on a top shelf. And front and center were all of Allen and Pat Ahearn‘s wonderful books on book collecting! A lifeline! Because they live nearby, I felt the Ahearns’ opinion would carry much more gravitas than mine. Also, they would be interested in going through every book in the collection looking for high spots, whereas the Wonder Book modus is usually to make a balanced offer on everything—looking at the overall quality of larger collections and offering a “lot” price.

“The Ahearns are who you want to talk to. Allen and Pat will be able to go through all of your mom’s books and pull out any better books. Most of what I’m seeing would be tough for me to find homes for at any price. After you’ve met with them, I think you’ll understand better what I’m getting at.”

I asked for a tour of the rest of the home. You never know… He led me into her upstairs office, and there were two walls of books. One wall was all pop-up books. The other was all Alice: several hundred editions of Alice in Wonderland as well as lots of non-book Alice…stuff.

But…I’d already punted the collection to another bookseller!

I left and called Allen on my way back to the warehouse. I explained the situation and asked if they’d be interested, “I’m pretty sure you’ll find some books there you can use. Most of the books ARE first editions. There are just so many that aren’t collected anymore. She used all your reference books, so she did know how to tell first editions!”

He agreed and I put the estate out of my mind and moved on.

I sort of assumed they would pick and choose the top 5% and make a very good offer on the valuable books. I supposed the son would then call me back to clear out the average (and below average) stuff. I could come back and make a reasonable offer on what was left once the son had a better understanding of the marketplace.

A couple weeks went by and the son contacted me again, “Your friend took all the books in the basement but he wasn’t interested in the modern books in Mom’s office. Would you…?”

I was there that afternoon. I bought all the Alice and pop-up books.

Then I started looking around and got hooked on some of the “other stuff.”

There was a cool painting of a printer I thought would look good in our conference room. I’m drawn to any object that relates to books or printing.

Well…and then I started buying groups of other things. He’d name a price and if I thought I could move the stuff I’d either counter or accept his price.

Cut glass? Am I crazy?

Yes. I was. Still am. Most of that is still here years later.

Yep, and crazy too for the fun and pursuit of new and different materials. Almost always books…but when opportunity arises…

The son reminisced about his mom and her collections. Turns out she had been a customer. But I didn’t recall dealing with her. She must have frequented the stores at odd hours.

I mentioned, “You’re still finding different things to bring out to display.”

He laughed. “You know Mom used to tell me, ‘The difference between a collector and a hoarder was the size of their bank account.'”

I returned to the little mansion a couple more times and expanded my commercial horizons on each occasion. He’d keep pulling out more collections from—I don’t know where—and sending me emails with updates.

His mom had kept meticulous records on most of the collections. I found notebooks she’d kept set amongst the various collections. She’d listed when and where she bought each item and how much she’d paid.

Was she a collector? Certainly. She was a brilliant and wealthy attorney. She studied each field she pursued closely.

Was there a bit of hoarder in there too? Maybe. She had no “junk.” She certainly had all kinds of neat stuff. A LOT of neat stuff. Where had she kept everything? I guess a lot of it had been boxed up and closeted, atticed, or basemented. Maybe there had been an offsite storage unit.

But I bet she had a lot of fun over many years. You’d have to have fun seeking out this much Alice!

Many booksellers will tell you that finding and buying is the most fun. That’s where the surprises are.

For collectors that is always true.

I ran into Allen a few months later and asked him how the buy was.

“It was okay. She had some high spots. I took everything so I could sort it out over time. There’s a lot of good but average and problematic books left that I can’t move. Are you interested in all of them at a low price?”

Problematic books are kind of a specialty at Wonder Book. 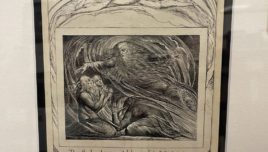 I'm at Reagan Airport. I have a 10 p.m. flight to Buffalo, New York. Why so late? The airline points... END_OF_DOCUMENT_TOKEN_TO_BE_REPLACED